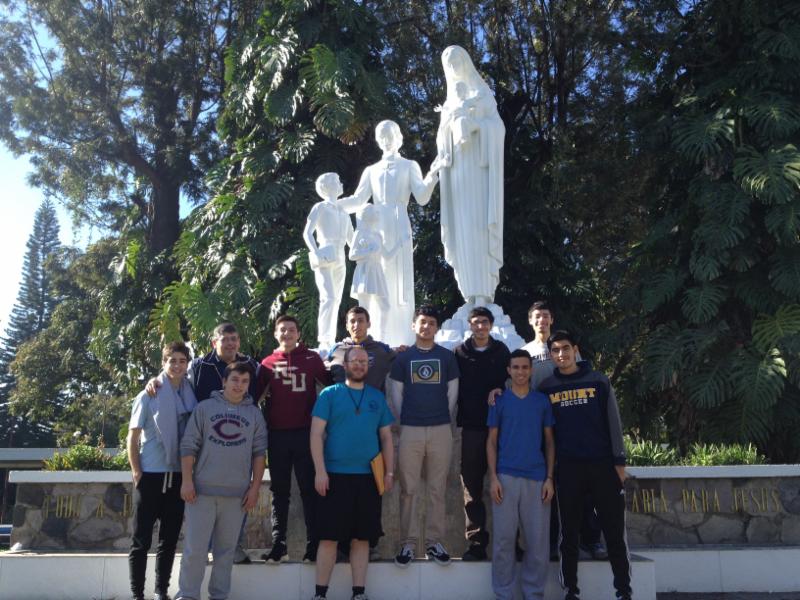 On Ash Wednesday, 2015, Bro. Brian Poulin and five Mount students- Daniel Cruz ’15, Jeffrey Medina ’15, Daniel and Darniel Figueroa 16, and Jorge Dumas ’17- departed for Guadalajara to take part in the International Marist Youth Leadership Camp in the mountains near Tapalpa, Jalisco. Two other delegations from the USA and those of 16 Marist schools in Mexico joined the Mount group.

The natural beauty was stunning, and most in our delegation had never before seen so many stars at night! Because Spanish was the official language of the conference, communication sometimes came with difficulty, but thanks to the great hospitality of their Mexican counterparts, our Mountaineers quickly formed friendships that not only span this country but crossed the border as well

Although it was natural for one or two of the students to deal with homesickness at first, by the close of the five-day program none were ready to return home. While there were formal opportunities to share culture and develop leadership and communication skills through assorted activities and workshops, the widely acclaimed highlight of the event was a Day of Solidarity, in which students experienced for several hours the difficulty of life as a Mexican day laborer and how quickly their meager earnings disappear.

This day of work and budgeting was capped by a three hour hike back to the campsite, as none had been able to save enough money for transportation. Whether or not they actually enjoyed every aspect of the day, all students came away with a greater compassion for those for whom such conditions are constant, or even enviable.

Between the unforgettable experiences shared, the newly unbreakable bonds formed, and the indescribable mountainous beauty that framed it all, the enthusiasm that all participants felt for the whole camp can best be summed up in the four words chanted by the group at the camp’s closing address: “No me quiero ir”-“I don’t want to go!”