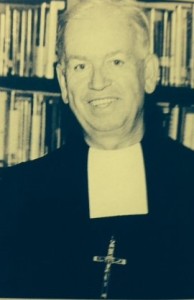 Bro. Francis Bernard FMS, a member of the Marist Brothers of the Schools for 65 years, died on June 5, 2014 at Champagnat Hall in the Bronx. He was 83 years old.

Bro. Francis Bernard entered the Marist Brothers’ Novitiate, at Poughkeepsie, NY in 1948 and professed his first vows in 1950 at St. Joseph’s Novitiate in Tyngsboro, MA. After completing his religious and academic studies at Marist College, Poughkeepsie, New York, he began his ministry in 1953 dedicated to the Catholic education of youth which lasted for 47 years.

Bro. Francis received his undergraduate degree from Marist College In English and a Masters degree in English from St. John’s University.

A funeral Mass was celebrated at the Chapel of Mount Saint Michael Academy, Wednesday, June 11 followed by burial at the Marist Brothers’ Cemetery in Esopus, New York.