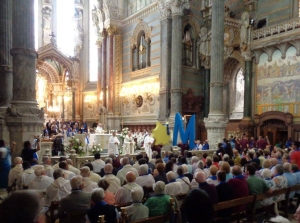 Nearly one thousand people gathered on July 23 to participate in the Eucharistic celebration in Lyon that commemorated 200 years since the first Marists promised to start the Society of Mary.

The Mass, held at the Basilica of Fourvière, was presided by the superior general of the Marist priests, Father John Hannan, and included the participation of Bishop Patrick Le Gal, Auxiliary Bishop of the local diocese.

Members of the four Marist branches – over 70 Marist Brothers, around 50 Fathers, several Sisters and Missionary Sisters – took part, as well as over 400 youth who had just finished the six-day long International Encounter of Marist Youth.

Participants wore a blue scarf with the words “200 years, still a promise” that had been handed to them at the entrance of the church.

The packed Basilica meant some of the congregation had to attend Mass at the crypt of the Basilica.

“We all feel united in the faith and solidarity in carrying out the mission and we feel this way thanks to the Lord,” affirmed Fr John in his homily. “This promise has given a very important impulse to the beginning of our Society of Mary and we pray that it also gives us courage today.”

“Those who made the Fourvière promise always posed themselves the question ‘why not?’ because they had a very deep faith and with that faith they could move mountains,” he continued.

Fr John underscored that “we are called today to translate that same faith into action and we, too, are called to dream.”

He then made reference to the gospel reading, the wedding at Cana, as the first public sign of Jesus adding that “that miracle had a profound meaning in the life of Jesus and much more than we are aware of.”

“It means for people to have life and to have it abundantly,” remarked Fr John.

He noted that it is necessary to allow ourselves to be shaped by Mary and that it is important to “put the Fourvière promise into practice” adding that Mary’s words in Cana were “do what he says.”

The congregation was then asked to renew the promise to Mary by reading the ‘Marist consecration for 2016.’

It included promising “to bring the best of ourselves; to choose to continue the work of Mary; to be bearers of mercy, life and hope; to want to make the Church friendly, open and faithful to the Gospel; to accept in advance the hardships and trials; to put all trust in God and in Mary.”

Before the offertory gifts, several volunteers carried a big sun and the letter ‘M’ shaped ornaments, symbols of the International Marist Youth Encounter, and placed it next to the altar.

At the end of the Mass, a message was read on behalf of the cardinal of Lyon, Philippe Barbarin, who had already arrived to Krakow for the World Youth Day.

He offered a greeting and paid homage to “those who follow the dream today” and entrusting participants to Mary, he stated that united with all Marists, he “thanked God for the Fourvière promise.” 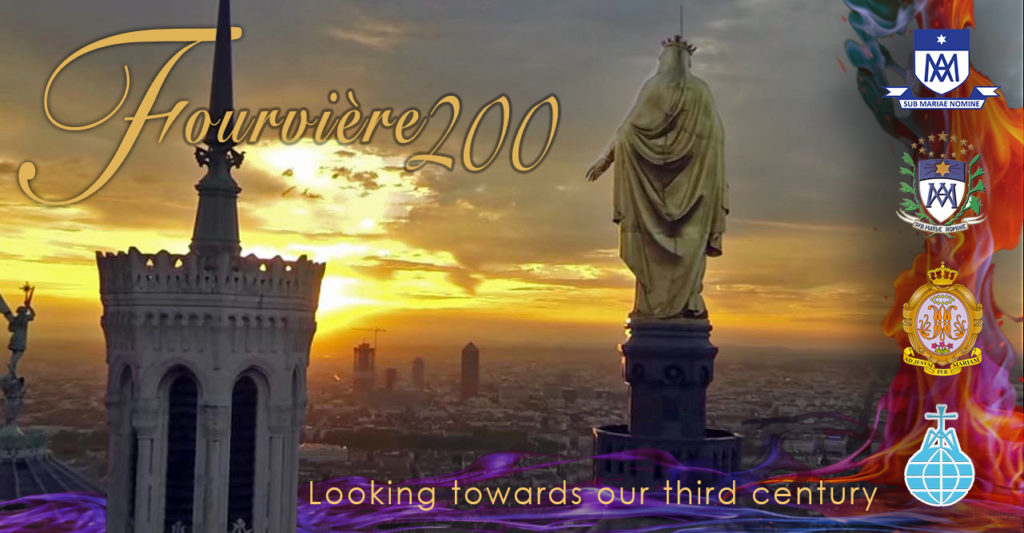