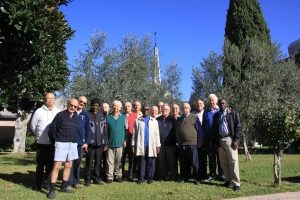 A group of English speaking Brothers from around the world are taking part in a two-month programme at the general house in Rome, Italy, to be guided in their transition to the third age.

The Brothers will go on pilgrimage to France on Thursday until Nov. 6, as part of the programme, to visit Marist places. Accompanied by Brother Michael Green, author of History of the Institute: Dawn’s uncertain light, Volume 3, their visits will include L’Hermitage, La Valla, Rosey and Marhles.

The course is being led by Brother John Klein and Brother John McDonnell, as assistant director, both from the United States.

“Even though I did the course myself last year, I have a different set of eyes now,” said Brother John Klein on Oct. 23. “You always engage in ministry and you never retire as a Brother.”

“It’s an opportunity for the Brothers to step back, reflect, pray and discern what God is asking them to do next,” he told the general house press office.

Br John underscored that “these Brothers have a lot of talent and life isn’t over. It’s about having new eyes to see life’s possibilities.”

There are 14 Marist Brothers and a Marianist priest taking part in the programme, which is running from Oct. 9 – Dec. 9. A second Marianist priest, Father José Ramírez from the United States, is serving as their chaplain.

Br John is running a blog during the programme. For more information, visit https://padlet.com/john_mcmahon/MaristThirdAge2017.