On Monday, 2 January, a group of people from the Marist Communities in New York and New Jersey attended a prayer service at Saint Patrick’s Cathedral in New York City. Brother Seán Sammon gave a reflection to the group. 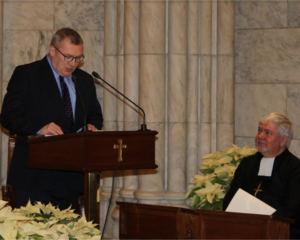 With the exception of the crucifixion, no scene in Christian tradition is more familiar to most of us than the image of the infant Jesus lying in a manger in Bethlehem. From the great artists of the Renaissance to the commercial Christmas card makers of today, this picture has been rendered again and again complete with a familiar casts of characters: visiting shepherds, wise men from afar, barnyard animals, and, of course, at the center of it all, a young and newly married Jewish couple and their infant son.

And, among the many characters who make up any traditional Christmas crèche, Mary the mother of Jesus has always been easy to spot. With the wonder and trauma of childbirth diligently scrubbed away, she appears as a picture of springtime freshness— hands folded, head bowed, eyes downcast demurely. How very unlike the Mediterranean peasant woman who brought forth a son in a stable whose destiny was to be the Savior of his people.

So, we must ask ourselves this question: What would possess us to transform the scandal of the Incarnation into symbols and scenes at once banal and prosaic? To mute its message and make it nothing more than a comforting tale of babes and barns, cribs and crèches, shepherds and angels that sing?

We can find the answer to our question in Mary, for we have similarly domesticated her, rendering her safe and risk free, unable to upset us and our understanding about the demands of faith.

Now, bear with me for a moment as I fast forward almost eighteen hundred years to a rather obscure village in central France by the name of LaValla. The revolution that swept that country near the end of the last century is now but 27 years and a few months old. It is January 2nd, 1817 and a young priest—the same age as the revolution—is about to set in motion a movement aimed at changing his world and ours. This twenty something young man was possessed by the same Holy Spirit that had captured the heart and seized the imagination of the mother of Jesus. At the moment, he probably didn’t realize that fact and wasn’t completely sure where he was headed but, then again, neither were the two young men who had joined him in this apparent foolhardy adventure.

A few weeks before he had bought an old house and did what he could to make it a home: building a table, beds, gathering other furnishings, simply cleaning up the place. But aren’t so many beginnings of greatness similar in form and style: youth, a willingness to be disturbed and to risk all, an apparent and absolute human need staring you in the face, as well as a faith that believes in the unconditional love of God.

And what did Marcellin Champagnat have in mind on that January day in 1817? What  went  through  his  head  that  first  evening  as  he  made  his  way  back  to     the presbytery from the small cottage in LaValla? What was his aim? Something quite simple: to help all young people—but particularly those at the margins, those who had very little in terms of material goods—to help them fall in love with God. It takes your breath away.

Similar to our Church’s approach to Mary, we Marists have spent almost two centuries scrubbing up Marcellin Champagnat, trying to domesticate him. But never forget that this founder of ours set in place the first stones of this Marist movement but seven months after being ordained a priest. He was more in touch with passion than burdened by prudence; he did not form a committee to study the idea nor worry whether he had funds sufficient to bring this dream of his to life. No, he simply did it.

So, where does all of this leave you and me today? We who have resources that he could not have dreamed of; we, who were we to open our eyes, might see the needs he would see today; we who keep talking about aging when a new generation of young people are longing for community, searching for mentors, hungry for the love of God. We must ask ourselves: are we, like him, willing to disrupt our lives, to be disturbed, to change, regardless of age, and to set out on an adventure today that he would make his own.

Let’s not romanticize the past. Make no mistake about it: there has never been a golden age in the history of our Institute. From day one, every period has had its crises. Marcellin and our early brothers contended with Cardinal Fesch, Vicar General Bochard, Father Corveille, as well as hateful gossip. In 1903, the laws of secularization  in France led to our suppression as an Institute in that country; well over 100 brothers  as well as lay Marists were murdered in Spain during that country’s Civil War; six of our French Marist brothers serving in Hungary during World War II were brutally tortured by the Gestapo because they gave refuge to one hundred Jewish children and fifty of their parents; following the revolution in China in 1950 many of our brothers in spent ten and twenty years in prison at hard labor because of their faith; ten years later more than 275 of our brothers in Cuba had their institutions and belongings confiscated and were told to leave their country within 72 hours; our brothers in South Africa integrated their schools in Joburg, Durban, Elizabeth Port and elsewhere in defiance of government apartheid policies, 204 of our brothers who have lost their lives to violence in Oceania, Asia, Africa, Europe, and Latin America are considered martyrs for the  faith. In our own day, we witness the courage of the blue Marists in Aleppo, Syria. These may not be our crises but they are crises nonetheless.

So, rather than wringing our hands in today’s US Province and fretting about increasing age and diminishing numbers, let’s instead give thanks for the great work that has been carried out by so many brothers and lay Marists over the history of our Institute in this country. Each of them realized that time is the only real currency that we have and they squandered it on young people. At the same time, however, let’s imagine for a moment that twenty-seven-year-old Marcellin Champagnat arrived tonight at New York’s JFK airport, or Chicago’s O’Hare, or Miami International, or Boston’s Logan. Where would he go; what contemporary absolute human needs would he find; would he be able to identify the congregation that he founded two centuries ago? Of this much we can be sure: Marcellin Champagnat was a man in love with God; his heart had been schooled by the gospel and he wanted to share this gift with every young man and woman he met. Yes, he wanted us to be the Church’s experts on  helping young people to fall in love with God.

And so we must ask ourselves: is every institution that bears our name or is administered by lay Marists or brothers here in the United States, first and foremost, a center of evangelization, a place where faith is witnessed to and promoted? We must  ask also: in our efforts are we giving priority to children and young people living today in this country at the margins of our society? Our early brothers in the US joined with their lay colleagues and established a series of elementary schools throughout New England to preserve the faith among an immigrant population. Once these places were up and running, they often moved on to meet new needs in new places. More often  than not, they faced human and financial challenges in their efforts and quite honestly there were times when concern grew that there would be enough money to meet payroll. But they persisted. So, let’s ask: who are today’s throwaway kids and pledge to make a commitment to mark this milestone of 200 years by making sure we have a  home among them: kids from broken families, those who are victims of racial injustice, young people who are members of the LGBT community, those whose lives are  ravaged by drugs as well as those who cannot find a place in our Church or most existing schools.

Anniversaries are not a time for looking back but rather a moment for planning ahead. They provide us with an opportunity also to rediscover the dream that was there at the outset. And we are called to carry out that task today as brothers together with lay Marists. And so, let this Lady Chapel in Saint Patrick’s Cathedral this January 2nd, 2017 be our Notre Dame de Fouviere. Let it be like that small and simple space that existed in Lyons long before today’s stunning basilica was constructed.

And let us make a pledge here similar to the one that those seminarians and newly ordained young priests—who full of dreams and of hope and who had been touched profoundly by this simple woman of faith named Miriam of Nazareth—were willing to pledge, dedicating their lives and becoming her presence in our world, giving witness to the Marist virtues of mercy and compassion. Let us be her heart and her hands among the young in this our 21st century and let us set out to build the Marian Church—that Church with the face of a mother—that they dreamed of for their time and place.

Early on Marcellin Champagnat discovered fire; he realized, too, that fire has always attracted the young. Let us pray that the Spirit of God lights in each of us the fire of renewal, giving us the courage to be as bold, as daring and as in love with God as  was this simple country priest and son of Mary. May we, like him, be fire upon this earth making Jesus known and loved among poor children and young people. And so may a third century of Marist life and mission take root and flourish in these United States. Amen.