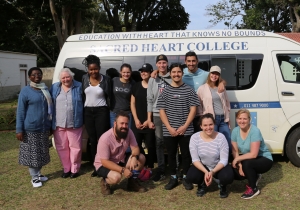 A Marist programme of the Southern Africa province, which offers education in South Africa to around 275 children from neighbouring countries who have been turned away from schools due to their illegal status, received volunteers over the summer that will stay from five to 12 months.

All except for Rebecca and Dhruvi are living with a South African young Marist in the new Marcellin House Young Adult Community in Johannesburg.

Ellene, Lena, Michael, Vincent, Sophia and Marius are volunteers from the ‘Collaboration for Mission, International’ secretariat of the Institute’s general administration.

The programme ‘Three2Six,’ which was set up by the Sacred Heart College in Johannesburg in 2008, teaches numeracy and literacy to children aged five to 13.

The teachers, refugees themselves, offer the children three-hour daily lessons in existing host school facilities, with the hope of eventually reintegrating the children in schools.

The Sacred Heart College recently completed a winter holiday programme where the children wrote and produced an animation film about the experience of being refugee children in South Africa.