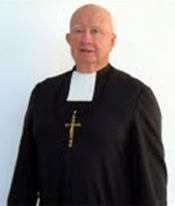 It was in 1964 that Br. Patrick first arrived at Columbus High School. Having already taught math both in New York and in Texas, Pat brought with him the energy and spirit of adventure, which marked his entire Marist life. Algebra 2 with Trig and Math Analysis were just a starter for his day. Coaching cross country, advising the Key Club, his community life of daily prayer, all found their place along with completing graduate course papers, running the school’s weekly fund-raising Bingo evening, and manning our barbeque pit along with Cy Sobeck at our spring auction and picnic. Or working with Br. Hugh throughout the year gathering “antiques” for Jimmy Culmo to auction at that that same event. And Pat kept up that pace, not just during the academic year, but throughout the summer as well. When others might have thought of a summer break, Pat was herding busloads of Columbus and Lourdes students through the museums and marvels of Europe. In more recent years, it would be off to Camp Marist in New Hampshire’s White Mountains, not for R & R, but for a round of daily assignments at Lake Ossipee’s edge as soon as the school year ended.

And this is a reminder of the range of Pat’s life. Whether it was one of his jaunts from Miami to Inverness by bicycle to visit his folks or a trek across the Atlantic to work in Africa, he embodied Marcellin Champagnat’s observation that “A Brother is a man for whom the world is not large enough.” And he saw in those with whom he worked that same potential for goodness and generosity. In remarking to his family only two years ago on the spirit of service among Columbus students especially at Thanksgiving and Christmas, he said, “Well, let me tell you a few things that give me hope. The wonderful boys that are attending our school are a great inspiration to me.”

Pat’s life says well what the Book of Wisdom teaches: “The witchery of paltry things obscures what is right.” And right always impelled Pat. Occasionally he wrote little pieces about incidents in his life. Pat told of George Wier, a crippled Liberian child whose family abandoned him at a roadside to be rescued by Pat and brought to Sister Sponsor, a Bernardine nun, who taught the boy how to use crutches with George going on to the Brothers’ school in Harper. And it is a reminder of Pat following Jesus who reminds us in today’s Gospel, “I shall lose nothing of what (the Father) has given to me.” In Liberia beyond the school day, he and our Marist community would work with nuns in the area at a clinic for lepers. Echoing this Gospel line of losing nothing, Pat would copy all these little stories on the blank side of used scrap paper. Among Pat’s papers was tucked an article to help him with his usual summer work at Camp Marist’s waterfront, the title, “Make Your Own Effective Fishing Tackle While You Save Money and Recycle Scrap.” Always making do with what was at hand, Pat never needed more than what was at hand whether it was being the first in community to say, “I’ll fix that,” baking the Irish soda bread for March 17th, or simply serving as a constant encouragement by presence and thoughtfulness in Marist community life.

Among Pat’s Liberia stories is his recounting of the Brothers’ taking refuge in the Bishop’s residence escaping the violent civil war wracking Liberia. “Well look at me!” he wrote. “Living with the Bishop. Big deal: he has no running water. Even the Bishop has to carry his bucket of water to the bathroom.”

His life covered many miles and many Marist undertakings, but it was consistently marked by the humility, simplicity and straightforwardness that mark our Marist ideal. In writing to the Thessalonians, Paul promises “the glory of the archangel’s voice and God’s trumpet,“ and Br. Patrick McNulty who did not need the “witchery of paltry things” is hearing these melodies now for “his soul was pleasing to the Lord.”