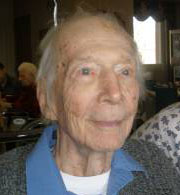 John Stewart Robertson was born in Savannah on April 4, 1919. He graduated from Benedictine Military School for Boys and then worked for three years before entering St Anne’s Hermitage in Poughkeepsie. He once told me how he spent a part of that three-year stint as a lifeguard at a YMCA or CYO pool in Savannah. This early training in water safety he would put to good use in a future summertime ministry at the Camp Marist waterfront. Finally, on July 26, 1941, he received the Marist Habit and was given the name “Brother Godfrey”.

Bro. Godfrey attended Marian Normal School in Poughkeepsie for two years, taught in Boys Catholic High School in August, GA, for one year and then Mount St Michael Academy for 3 years. It was during this time at the Mount that he was awarded a bachelor’s degree in education from Fordham University. He then taught at St, Ann’s Academy for one year before being assigned, in 1949, to Central Catholic High School, Lawrence MA, for 17 years. It was during this time, in 1955 to be exact, that he completed a Master’s Degree at Staley College of the Spoken Word. This college closed its doors in 1957 but, in its day, had attracted graduates of Harvard and other elite institutions. In fact, one of Jack’s fellow students was a young man by the name of John Fitzgerald Kennedy, future U.S. President.

Brother Godfrey was still called Jack by family and friends; “Big Jack” by many Marist Brothers. An imposing figure at Central Catholic, 6’7” with a deep baritone voice, Jack did not have to worry much about classroom discipline. He stayed at Central 17 years (1949– 1966) and was responsible for the hugely popular grammar school basketball league. Started as a public relations venture to make Central Catholic known in the City, this league grew to 50 teams, virtually all the public and Catholic grammar schools in the Lawrence area. If you were a Brother at Central in the 1950’s and 1960’s you knew where you would be most Saturdays till 2 PM or later. You were a referee or did other work to run the basketball league. Bro. Rene Roy at Central Catholic reports that, to this day, alumni still come to express their love for Brother Godfrey. He took public relations in this Marist school to new levels. And by the way, he could also be heard, with Tom Clayton, on radio station WLLH announcing high school basketball games.

Meanwhile, his summers were spent at Camp Marist in Center Ossipee, New Hampshire, where he held the position of Waterfront Director for some 13 years. He was a prominent fixture during those summer months with his pith helmet and signature sandals perched high up on the lifeguard seat or patrolling the waterfront with his megaphone. Yesterday I interviewed a gentleman who, as a junior in St. Helena’s High School, worked as a kitchen helper at Camp Marist in the early 1960’s. “What do you remember most about Bro Godfrey?” I asked. “His gentleness, his fairness, his generosity,” the man answered. It seems Bro Godfrey, a licensed instructor, offered a free water safety course to the kitchen helpers enabling them to become certified lifeguards. Big Jack got respect. He had no need to shout. When he spoke, the kids knew he meant what he said. “In other words,” the man told me, “Bro. Godfrey was admired by all.” His great contribution to the development of the waterfront has been recognized by the Camp administration. The Camp Marist waterfront is now known as “Godfrey Beach”.

It’s one thing to know what a man did, both inside and outside the classroom. It’s something else to know him as a person. These two events, the basketball league and the camp waterfront, help us see, albeit vaguely, the real person. Big Jack was well read and quite knowledgeable especially about the theatre. He and his buddy, Bro. Jim Gaffney regularly went to see plays on Broadway, off-Broadway and off, off-Broadway. The story was told of how they sat down one Saturday to see a play in some little, unknown, off, off-Broadway theatre. They looked around and found the two of them were alone in the place. They got up to leave, but the manager told them to sit down for the show will go on…just for them. Not only theatre, but other areas of NYC culture, too. For example, Jack once told me how, on marathon Sundays in November, he would go to Central Park and sit on the stone wall to watch the runners cross the finish line. Jack was not a runner, but he did love to walk. His family, niece Therese, nephew Jack and youngest brother Jim all here tonight, saw this when Jack was visiting them in Savannah. Also, the two priests here present, Frs. Frank and John, both from Spellman High School could tell us how Big Jack, in the nine years he taught there, would frequently walk back and forth to Spellman from the Mount.

As Jack approached his twilight years, his health failed and he was given only a month or two to live. Since nothing could be done for him medically, it was recommended he enter Calvary Hospital as a hospice patient, be given palliative care, kept comfortable as death approached. After a couple of months; however, the doctors noticed Jack was no longer a candidate for hospice. He was no longer dying and thus became one of the few patients of Calvary Hospital to be discharged back home. Coming face to face with death at Calvary Hospital proved to be a deep spiritual experience for Bro Godfrey. He visibly mellowed, relaxed and smiled more frequently. Months later, back at St. Patrick’s Home, Jack sank into a coma. This time it was clear he was about to make the transition from this life to the next. While the Rosary was being recited, they came to the first joyful mystery, the Annunciation. As the leader said the words “and Mary said behold the handmaid of the Lord, be it done to me according to your word”, it was right at that moment that Jack sighed and passed to the arms of Our Lord.