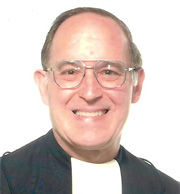 A questions is posed in the Bible – “Oh death, where is thy sting?” It is a lament we see repeated in Shakespeare and has come down through the ages. Where is thy sting? For our brother, George, I believe in the last two months, he might have said: “Oh, death, bring me your rest and comfort.”

For two years, George suffered – a pain that would not go away. A pain that was physical, emotional, and neurological. In his last year in Rome at the Marist motherhouse in EUR section of the city – George had physical problems – his back – surgery – his kidneys. He became remote – distant, fearful, anxious. When he came to the States last year in May or June, the pain continued. In fact, it became worse, physically and emotionally. He went for all the tests, all the therapies, took all the medications – nothing helped – nothing stabilized his downward motion – his decline. It was very hard – for George and for the Marist community at Mt. St. Michael. Brother Dave said that this was “George’s Passion” – an imitation of Christ. That’s true. But like Jesus in the garden, he did not want to die. He did not want to drink from the cup that was in front of him. But it was not to be. Most painful for Brother George was the reality that he could not be part of his community of Brothers. George always loved his community and his Brothers. It was his life. But he could not mobilize himself. He was unable to leave his room, to go to the rec room to converse, to break bread with his Brothers, to join others. It was so painful. He wanted to join, he knew he should join, but he could not. And, so, now he is at rest.

But, we shouldn’t dwell on the recent past, the last two years. Let’s look at the arc of 70 years before that time. George had a happy childhood. He was the second of three children. His father was a teacher in the New York City school system. His mother was devoted to her children. She was a pious woman – a prayerful woman. George saw what I always saw – prayer books in her purse, Novenas, First Friday devotions, rosaries.

At some time, when George was 13 or 14, while a freshman at Cardinal Hayes High School, he encountered the Marist Brothers. The summer following, he received “the call”. He asked for and received parental permission to attend the Marist Brothers Preparatory School in Esopus, New York, across the Hudson River from Poughkeepsie. And, that’s where it all started. And so he went to the prep school for three years. And then off to the Novitiate, a two-year program of theology and discernment in Tyngsboro, Massachusetts. George took the Marist habit and his first vows. Then, he went to Marist College for four years of schooling where he majored in Latin and French. Thereafter, he took his final vows – the vows of poverty, chastity and obedience. Then he began his ministry – a ministry of teaching by example. And look where it took him: Chicago, Illinois, Wheeling, West Virginia, Lawrence, Massachusetts, New York City, Poughkeepsie, New York, Canada, Switzerland, Japan, Italy – two places, Manziana for many years and Rome. If one looked at his résumé – at his accomplishments and his positions, you would say, “Wow, this man has been around the world and connected with the world.” But, if you knew George – you would recognize that while he was in the world, he was not of the world.

George was primarily a spiritual person. He knew his gospels – he knew the Old and New Testaments. And, it was not just knowing where in the Bible or what was in the Bible, but you knew that George thought about everything in the Bible. George took his vows very seriously – chastity, obedience, and poverty. Last night at George’s wake, reference was made in the prayers to the Last Will and Testament of the founder of the Marist Order – St. Marcellin Champagnat. In his Will, Champagnat wrote, “My dear Brothers, be faithful to your vocation, love it and persevere courageously. Maintain a great spirit of poverty and detachment.” That was George. A great spirit of poverty and detachment from the world. How often Virginia and I suggested to George that we go to Bloomingdale’s or Lord & Taylor to get him a new shirt or pants. He would absolutely refuse.

Champagnat continues, “There are difficulties in leading the life of a good religious.” Difficulties, indeed. Difficulty made worse in the modern era where the values of the modern world are the exact opposite of chastity, obedience, and poverty. And, George persevered. When the Order permitted its Brothers some degree of self-direction in the placement of service, George offered himself to whatever the Order wanted – and went wherever he was needed. The most important thing to George was the “community” of Brothers. No matter where he was sent or no matter where he was living, it was always the community. How many times we said to him, “George, stay for dinner.” – “No, got to get back to the community.” “George, stay overnight; we’ll have breakfast together.” – “No, got to get back to the community.” “George, come away on vacation with us.” – “No, I gotta get back to the community.”

But life was not all serious for George. He loved a good laugh. Even while in the hospital in the last two months, we could get him to smile. Some of the Brothers and family who visited George were able to get him to smile. I remember, he and I had a good laugh recalling how, when in the 70’s and he was living on 34th Street and I was a bachelor living in my own apartment in Greenwich Village, I was able to call him directly on a phone line. I would call him at 10:30 or 11:00 or 12:00 at night and say, “Hey man, how are ya’ doing and what’s going on?” This went on a couple of times. On the third or fourth time, I remember George saying, “Rich, could you possibly call me earlier? I go to bed at 9:30 or 10 o’clock.” We laughed at my youthful exuberance.

I’ll tell you a secret. While you might know that George loved singing and had a good voice, he enjoyed Gregorian chant with the Brothers and joined many choirs. In fact, when he was in Italy at Manziana, he joined the local parish choir and was glad to practice with them and sing at the masses. But the real secret is, and very few people know this, George loved Karaoke! Can you just imagine – three or four guys in Japan leaving the house and going to a Karaoke bar where they sang their hearts out until 10:30 or 11:00 at night!

And so, how appropriate it is – that George’s returning to the place where it all began for him 60 years ago. To Esopus, New York. The Prep School is gone but now it is a retreat house and there is the Marist cemetery. George has earned his right to his rest. And there, he will be with his community of Brothers. We can certainly say without question that George has fought the good fight. That he has finished the race and that he has kept the faith.