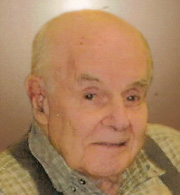 How does one some up the life of a dedicated Marist Brother? I would just like to share a few of my own recollections of our Brother Eddie.

I would like to first note the presence of Ed’s family, especially his brother, Joe. Brother Ed spoke often of his family with great love and concern. He spoke of his brothers, his sister, his nieces and nephews. I’m sure that his concern for them will now be expressed in the Kingdom of our loving Father.

For more than 15 years, I drove out to Bellport almost every Saturday to visit Eddie, Jogues and Danny Grogan. The usual pattern once I arrived was to sit around the kitchen table and chat with Eddie. Who remembers how many world and Marist problems we solved together? I know that we always enjoyed each other’s company.

Brother Ed had a great love for his Marist family. He enriched each of his Brothers by his presence, by his work and ministry. He told many stories of his experiences both as a teacher and maintenance worker. He started his teaching career right here at Mt. St. Michael. He taught the younger grades and also supervised in the dorms.

He was no stranger to a wrench, a paintbrush and furniture-making tools. Evidence of his work can still be found in Esopus, Bellport and at Archbishop Molloy High School. He would notice what needed fixing and set to work.

I first met Brother Ed when I was a young teacher at Christ the King High School. I visited him to learn about moderating a Poster Club. He was happy to share with me and I was amazed to see not only simple posters but some very advanced artwork. He had a knack for encouraging students and bringing out the best in them. The Poster Club operated out of the Mechanical Drawing Room at Archbishop Molloy High School. When the school discontinued Mechanical Drawing, Ed wore the cap of an Algebra teacher.

What did Ed do for recreating aside from helping others? I remember the model train set he created in the attic of Bellport. He loved the challenge of a jigsaw puzzle and enjoyed watching TV. He and I would sit together for Notre Dame games. We were elated when they won and somewhat dejected when they lost. Ed would appeal to Brother John Berchmans, who at that time was already in heaven, to intercede. Just a Hail Mary pass, if you please. I have been noting Ed’s love for his family, the Marist Brothers, his work, his ministry and his recreation.

What about the most important dimension of his life? His spirituality, his relationship with a loving God and with Jesus and Mary? Hos can I know the depths of his spirituality? I really can’t, but I would like to offer some evidence of deep spirituality. I know that he always was present for the Eucharist. He would drive himself to the local parish in Bellport and when he resided here at the Mount, he was always at the liturgy unless his health dictated otherwise. The Brothers at the Mount can attest to his faithfulness to community prayer.

When I would visit him at the Mount, it was not surprising to find him in the chapel. What did he say to the Lord as he sat there? Or did he just listen and say, “Do unto me according to you word.”

I remember a day, when Eddie was rushed through the dining room with a bruise on his forehead so he could be checked into the hospital. Why do I bring this up? The reason Ed fell was that he had dropped his rosary beads and had his head when he tried to pick them up. Clear evidence of his devotion to Our Good Mother.

I believe Eddie was deeply spiritual in his own quiet way.

I’m going to stop here because I sense Eddie looking at his watch and saying, “enough already.” Ed, you are now at peace with your parents, with many family members and with a huge number of Marist Brothers in heaven. You have finished the journey and you are with our Loving God, with Jesus and Our Good Mother.