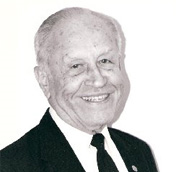 Brother Cornelius Russell entered the Marist Brothers in 1947. He held degrees in history and education and taught at St. Helena in the Bronx, Central Catholic in Lawrence, Massachusetts, Archbishop Molloy in Queens, New York, and Aquinas High School in Augusta, Georgia. In 1961, Br. Cornelius was assigned to Marist College.

He lived and worked there for over 40 years, serving as a professor and controller of the college with a cheerful grace that endeared him to all—in spite of his winning expertise at bridge. He passed away in October 2009 at Cabrini Nursing Center after a long illness.