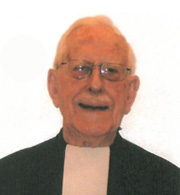 Tonight we are gathered to honor the memory and the legacy of a faithful Marist Brother and a loving uncle and great uncle, Br. Chanel Lambert. From my short association with Chanel these past few years, I know him to have been a man that enjoyed being with the Brothers as well as his family. He was people-oriented, made friends easily and conversation was his strong point sparing no detail in his delivery. We all experienced his many phone calls on our birthdays or anniversaries – a talent very few of us have developed. On that note, I was probably the last one he spoke to on the night he suffered a stroke. I was in Oregon and just about to leave the house. He knew that if he did not call early, he would miss the opportunity of giving me his best wishes on my birthday.

As family members have attested, Chanel was a generous and appreciative person. His middle name was “Thank you, Thank you!” He would take small gifts out of his bag to show his appreciation. Chanel was an avid sports fan, or should I say, rabid fan when it came to Boston College or Notre Dame. He and his nephew, Bill, would be on the phone either before or after a game to analyze the victory or, God forbid, the loss.

IChanel was a Marist Brother for 71 years. As a Marist, he did the work of the Lord in Massachusetts, New York, Illinois, Oregon and finally, Florida. He served as teacher, administrator, and camp director at Taconic Lodge in Cold Spring, NY and as plant manager at several of our Marist schools. His life was a reflection of our Founder, St. Marcellin Champagnat. His devotion to our Blessed Lady, our Ordinary Resource, was strong. During his illness, particularly over the last few months, I would hear him reciting the rosary as he sat in his chair praying and resting.

Words at a time like this never do justice to the contributions made during a man’s lifetime. As our Marist Constitutions state, “We, as Marist Brothers dedicate ourselves to this single aim: to follow Christ as Mary did.” Chanel had a similar aim. He wanted to be remembered, “…as a Marist Brother who did his best to live as one following the precepts of the vows of poverty, chastity, obedience, and stability, and have a viable devotion to Mary.”