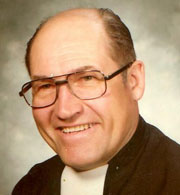 There is an old Buddhist saying: “When the pupil is ready, the master will appear.” Brother Robert Andrew Matuga spent 89 years of countless hours of work in order to be ready for this appartition. I have read some place that “time is God’s gift to man, and what man does with this time is man’s gift to God.” Brother Alphonse filled his gift basket with several activities, both spiritual and physical. He took great pride in never missing daily Mass. For this reason Br. Kenneth recalls that “Br. Alphonse truly had a heart of gold. His kindness was unmatched to the point where he was occasionally at fault for committing his help to more than one person at the same time. He just could not refuse anyone.” Other associates described him as a man full of tireless competitive energy.

As I tried to put this together my thoughts were all over the map and somewhat disjunctive. Why not? We are talking about Alphonse. What words come to mind when you speak of Br. Alphonse: friendly, energetic, patient, spiritual, kind and I might add loquacious. Before multi-taking became an in word, Al defined it through his many activities. Up to and having reached the age of 82, Al still could be leading his St. Mary’s High School ski trip down the steep New Jersey slopes or playing a mean game of tennis at camp or St. Mary’s. What energy! Some years ago, one of the Brothers suffered a stroke and I was exchanging thoughts on this with Mike Driscoll. Mindful of my own age, I said, “That is scary.” At that moment Al came running down the hall after returning from a ski trip with students. Moreover, he drove the school bus to and from the event in New Jersey. As he passed, he said, “Pat, I am going to the health club to work out. Do you want to go?” Mike looked at me and said; “Now that is scary.” Al never refused to engage me in tennis while I was at St. Mary’s. Why? He loved winning. What patience! One of the summers I was allowed to work at Camp Marist, Alphonse and I covered tennis activities. One day a young physically challenged student arrived on the scene. Al worked patiently with that young man for 40 minutes. He did it with a smile and an encouraging word. Al loved camp and every fun activity. It has been rumored that the then Administration, not the present Administration, wanted to charge Al tuition. Jack Curran, Varsity coach at Archbishop Molloy, mentioned that Br. Alphonse was his JV coach and an excellent one.

On a school building there is a statement by Ralph Waldo Emerson: “What lies before us and what lies behind us are tiny matters compared to what lies within us.” What did lie within Br. Alphonse was his love of God and his happy optimistic outlook on life. In conclusion, we bid farewell to Al on his journey and by now St. Peter is thinking: How do you solve a problem like Alphonse? Ad multos Annos in Eternity.