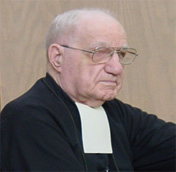 Brother Oswald Ouellette, a longtime member of the Marist Brothers, known to most as Brother Oz or Ozzie, and a teacher at Marist High School in Chicago, has died. He was 95. Born in Lawrence, Massachusetts, he joined the Marist Brothers in 1932 and taught in New York, New Hampshire and West Virginia before his assignment in 1966 to Marist High School on Chicago’s southwest side. He taught history and served as community bursar until he retired from Marist in 1992.

Retirement, though, didn’t mean he was gone from the school. “You’d see him walking around the school,” Marist Principal Larry Tucker said. “He was just a fixture.” When Brother Oz retired, he lived in the Marist monastery with six other brothers and served as a volunteer for the Marist Development Office. In the monastery he was known for his love of social activities, sports and music, including classical, opera and musicals, Brother Kevin Moran said. “He’d sit in his room, and we’d hear the music being played.” But most of all, Brother Oz was known for recounting his trips to Europe. “He was a great storyteller,” Br. Kevin said. “He loved to travel.” As a history teacher, Brother Oz used that first-hand knowledge to excite his students about learning. He’d bring history down to earth, Br. Paul Forgues said.

His death will be felt by the tight-knit community. He will certainly be missed here.

Strengthen your Church to be an advocate for the vulnerable.