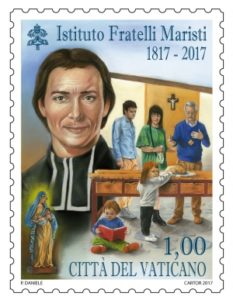 The Vatican post office, the Ufficio Filatelico e Numismatico, has designed a postage stamp for the Marist bicentenary, which it will sell from Sept. 7 onwards.

The stamp will cost €1 Euro and its release will coincide with the start of the Institute’s 22nd General Chapter the following day in Rionegro, Colombia.

The design, by Patrizio Daniele, depicts Marist elements such as the Good Mother, Saint Marcellin Champagnat, the Cross, the table of the first community of brothers in La Valla, France, surrounded by Brothers and laity caring for children.

The general house communications office carried out the initiative alongside the Vatican, although the idea originated from the alumni of the Marist School San Leone Magno in Rome.