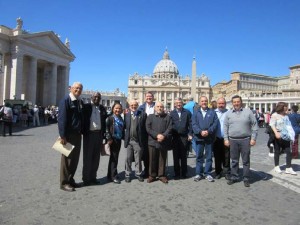 Above: the Marist delegation
at the Vatican request the opening of Basilio Rueda’s cause.

The Vatican process may start the cause of canonization of Brother Basilio Rueda within days, after a group of Marists delivered the investigation completed at the Diocese of Guadalajara, Mexico.

Ten Marists from the general council and the provinces of México Central and México Occidental – including several acquaintances of Basilio – handed the Congregation for the Causes of Saints two large boxes on April 20, containing thousands of pages on his life.

After handing the investigation of a Diocese, the prefect of the Congregation – Cardinal Angelo Amato – can take up to 15 days to decide on the possibility of investigating the cause for sainthood, that is, by May 5.

The documents that were handed to the Congregation are written testimonies of Br Basilio, analysis of his personal letters and circulars he wrote during his 18 years as superior general, as well as proof of his biographical data, such as his birth certificate and the marriage certificate of his parents.

Among the group was his postulator, Brother Luis Jorge Flores Aceves, and Brother José Esteban, the ‘official carrier’ of the documentation, appointed by the Diocese of Guadalajara.

They gathered with Father Giacomo Pappalardo, in charge of collecting information on behalf of the Vatican about possible new saints.

After the Marists met with Fr Giacomo, he accompanied Brothers Luis Jorge and José Esteban to submit to Cardinal Amato’s secretary the application for the decree of the opening of the Vatican process.

After being affirmed a Servant of God, the Vatican must declare a person ‘Venerable’ and then ‘Blessed’ before the Pope can canonize him.

A person is given the title ‘Venerable’ after the Congregation affirms he was “heroic in virtue,” which means he lived the theological and cardinal virtues to a heroic degree.

The Congregation then declares the person ‘Blessed’ if a miracle attributed to this person is proven and ‘Saint’ after a second miracle.