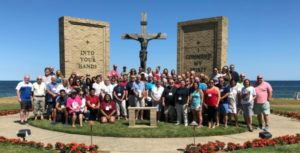 From July 18 – 20, over 75 lay Marists gathered at the San Alfonso Retreat Center in Long Branch, New Jersey, for the first assembly of lay Marists of the United States province.

The different sessions held during the assembly were themed The sorting hat, Discover, Dream, Design and Create and Co-Creating provocative propositions.

On July 18, ‘The sorting hat’ activity consisted of participants dividing themselves up into one of three “houses” – Mission, Spirituality, and Shared Life.

Participants were called to choose which part of the Marist charism they identify with the most and, in each “house” they discussed why they chose to participate in the assembly and what they hoped to accomplish in the assembly.

On July 19, there was a prayer walk on the beach during the ‘Discover’ session followed by a presentation given by both Pep Buetas (https://bit.ly/2JUeo7U ), the codirector of the Secretariat of the Laity, and Patti Rios from Tijuana, Mexico.

During the session ‘Dream’, participants were divided into seven groups and each reflected on what they hope the new Lay Association will look like over the next five years.

The workshop ‘Design and create’ focused on drawing up concrete plans, such as a new website for lay Marists of the USA province and new social media accounts to publish their news.

On July 20, they discussed topics related to the province’s lay Marists such as communications, leadership, local communities, national communities, formation programmes, and communion.

Several recommendations were made, such as monthly prayer gatherings in regional areas, a lay Marist newsletter, creation of lay Marist social media platforms, the creation of a Lay Marist steering committee, and a possible Director of Lay Marists in the province.