WHEELING—“I am encouraged by Pope Francis’ designation of the Year of Consecrated Life and that he gives recognition to those consecrated to God and the contributions they have made over the centuries,” Brother John Byrd, a Marist currently living in Wheeling said. Byrd said the designation brings attention to what the consecrated life is and its affect on the world and those around us.

Byrd said the consecrated life should not be viewed as merely a list of rules on how to live. “Being a Marist has changed my life,” he said. “It is the challenge of living our vows with integrity. The vows of a religious man or woman are not a list of should nots or can’ts, it is a vow of what we can do, a call to love and be inclusive. One of the Marists traditions is to create a sense of belonging. We look at others and recognize their gifts and talents and encourage them.”

As a community, the Marists take vows of modesty, simplicity, humility and obedience—which for them means to listen to one another. The communitiy is represented in 76 countries throughout the world. But it is the word “Brother” that Byrd said means the most to him as a member of the Marist community. “We are called to be brothers to other people,” he said, “to walk with them. We live in hope and believe in God’s agenda. That has been the impotence of my life—where do I see the face of God in other people and I hope I can be that to other people.”

The Marists have achieved this mission evidenced in their rich history of forming and teaching in many Catholic Schools throughout the state. Byrd, like many of his Marist brothers spent years teaching both in West Virginia and throughout the country. Byrd spent time as an educator in New York, Connecticut, Massachuessettes and California. Most recently, from 2002 to 2012, Byrd was a teacher at Bishop Donahue Memorial High School in McMechen. But it is his time spent as a teacher at an international school in Kobai, Japan, that Brother Byrd said truly showed him the mission of the Marist community. “I was in Japan in 1995,” he said, “when there was a huge earthquake. We lived in the third floor of the school and my room split apart. Once we got outside, there were Japanese people standing outside our gates crying, so we opened our gates for them to stay with us. Within hours, we had several hundred people coming to us. We tried to feed them with what we called ‘earthquake soup’ and I said to myself, ‘this is truly Marists’ because, although our homes were destroyed, we were still attentive to the needs of the community and how can we best serve them. They lived for almost six months at our school.” 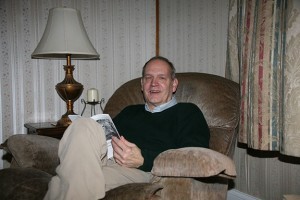 Brother John Byrd sits at the Marist residence in Wheeling.

Now in retirement, or as he calls it “re-firement”, Byrd still finds opportunities to live out the Marist mission. Each of his days are different—he assists homebound families with medical needs and shopping. He volunteers as a tutor at a local elementary school helping first-grade students with reading and writing. Byrd also attends weekly prayer groups.

With the help of fellow Wheeling residents, Byrd has also formed the South Wheeling Preservation Alliance which seeks to identify, preserve and promote the unique spirit and character of South Wheeling. The group seeks to educate others about the rich history of the area and foster its development in the future.

“Christ came to us once,” he said, “but I try to think of how I can allow Christ to be born in me today and how can I recognize him in others. The Marists motto is ‘All for Jesus though Mary.’”