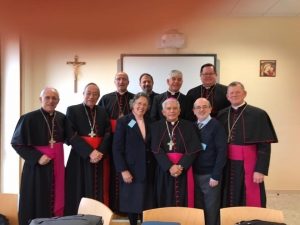 Superior general Brother Emili Turú took part in the plenary session of the Congregation for Institutes of Consecrated Life and Societies of Apostolic Life on Jan. 27 and 28.

The plenary is formed by 18 cardinals, 15 bishops and seven general superiors. The Congregation invited seven superiors of female religious congregations to also take part in this encounter. Pope Francis appointed Brother Emili as a member in February 2014.

On the first day, the group met with the Congregation of Bishops with the goal of increasing dialogue between the two Congregations, in the light of the document Mutuae relations that describes the relationship between bishops and religious within the Church.

During the rest of their meeting, members studied the theme “Faithfulness and perseverance,” whose reflections will be made public soon as “Orientations” of the Congregation.

On Saturday, Jan. 18, the Pope received the participants. He asked the religious to live the community life intensely, renouncing, prophetically, to the culture of the provisional. (Read here the Pope’s text, in Italian)