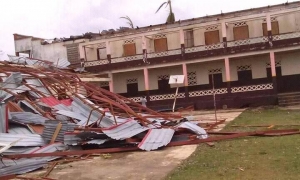 Donate to help the affected population

After the tragedy of hurricane Matthew, which cuased over a thousand deaths, Brother Louis-Jeune Jean Mance, who lives in Les Cayes, sent news describing the situation of Haiti residents.

Below is a description of the situation, which was sent on Saturday, October 15.

I visited our communities in Dame-Marie, Jérémie, Latiboliére and les Cayes. The colour of the environment of the whole state of the Department of Grand Anse and les Cayes is a pale grey.

A week after the hurricane, I could arrive well to Dame-Marie. They already removed the tree trunks that were on the roads and cars are able to circulate.

When I reached my house, I could not follow the path towards Anse D’Hainault and they say that that city is even worse. Not only are there no paths, but there are also many cases of cholera and a lot of destruction.

In Dame-Marie, the trees are dead and the houses are destroyed. Not even the trunks of the fallen trees are left and the homes have no roofs left or have fallen completely due to the strong winds.

There is also a lot of heat and yesterday (October 14), the first rainstorm took place. One can only imagine how wet people got.

Many people, with whom I was able to speak, say the same thing. The city does not exist anymore, everything is destroyed. This is our reality.

Then comes the food. Crops have been lost and there is no fruit as the trees fell.

One can count the few homes that have remained standing.

The brothers are well.

In Latibolière, they have nowhere to sleep and despite this, they attend to some families that arrive seeking refuge with them in the lower part of the school.

I saw brother Parnel sleep in the truck of the community. He says he has nowhere to go.

The roof of the novitiate situated at the front of the chapel has flown off. The wall of our community fell in three different places.

Big trees fell down and there are no fruit trees nor vegetables left.

In Dame-Marie, the roofs of schools have gone as well as the roof of the residency of Fatima.

The damages of the hurricane are huge.

The house of Dame-Marie has been left standing, but three windows fell when the hurricane passed.

In Les Cayes, the hurricane has destroyed two homes. Everything they own got wet. The cages of the chickens flew away and the chickens have disappeared. I saw that some of the rabbits that they have survived.

The houses of Brothers Dimmy, Mayliko, Erso, Bricely, Junel and Alex, among others, are completely destroyed.

The homes of the others also have a lot damages.

This is the big picture. The situation is very complicated.

I hardly saw the presence of some NGOs, like the Red Cross, Food for the Poor and Minusta.

International food aid is arriving late. Just yesterday, I saw a boat that gives food for the needy arrive.

There is a shortage of water and food. However, the most urgent and grave thing is the people that suffer for not having a home and this is very, very urgent.

I hope those in charge start acting responsibly.

Meanwhile, I have left you with some of the things I have seen during my visits.

The Brothers send you many greetings.