Proposal by the General Council

The General Conference in the Hermitage allowed Brother Emili Turú, the Superior General, to deepen the theme of Linking and Lay Membership through an international meeting held in Rome in March 2014. Various suggestions were offered at this meeting to the General Council. These materialized in a Proposal that the Council itself established in June of the same year, and transmitted to the Secretariat of the Laity to implement it.

The General Council understands that the end result of the process will be presenting a framework for the identity of the lay Marist who feels called to live the Marist charisma in the midst of the world.

It will involve a recognition of this identity in some form of association, and in communion with the brothers. It will be of an international nature, but taking into account the cultural and regional diversity. 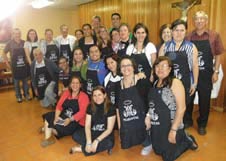 The Council wants to offer the 22nd General Chapter this overall framework, taking into account over the coming years the different experiences the Institute has had. With the clear criteria of basing itself on the experiences the Institute has already made, the Secretariat of the Laity summoned several lay people who could elaborate a roadmap for the Council’s Proposal. This team was made up of the coordinators Pep Buetes (the Secretariat’s co-director) and Ana Sarrate (Iberian and Champagnat Movement), as well as Joe McCarthy (Australia), Nohemy Pinto (Central America), Raúl Amaya (Santa María de los Andes), Eder D´Artagnan (North Central Brazil) and Javier Espinosa of the Secretariat of the Laity.

The elaborated document titled “Basic elements for the design of a Global Framework of the Marist vocational discernment for laity” collects clues and criteria for working in deepening the Proposal of the Council. The Secretariat wants to involve other groups and commissions in reflecting on those years prior to the Chapter, especially those who have introduced experiences on the subject and those who want to initiate them.

The process seeks to being fundamentally lay and experiential. The document’s introduction points it out: “By offering this proposal, we, as lay Marists, gather the feelings of many lay Marists who, from all over the world, want to live the Christian spirituality and mission as Mary did, following the insight of Marcellin Champagnat. We feel like Marists with them. We share with them the call to a specific way of being disciples of Jesus. We feel the same Marist heart beat with them. Our desire is to express all this experience as a journey of growth and training, which helps others have the same experience.”

This project might be the most ambitious and significant ahead of a future of communion regarding Marist charisma. The proposal reflects much of the thinking taken in recent years; it is a way of responding to what was expressed in the Chapter of 2001; It seeks to move from good intentions to concretions on the specific form of living the Marist charisma with lay identity. These are good news for many brothers who, for years, sensed that this would happen and who rejoice to see the gift of God to Champagnat and to the Church shared with other Marists.