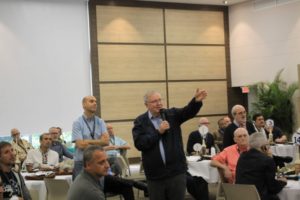 The first session of the afternoon marked the official opening of the XXII General Chapter.

After the Marian moment, Brothers Emili Turú, president of the Chapter, and Juan Carlos Fuertes and Joe McKee, members of the Provisional Chapter Committee, opened the business work of the Chapter.

Brothers Deivis Alexandre Fischer and Bernardo Baudin, respectively the youngest and oldest of the capitulants, were appointed as tellers for the counting of votes.

Brother Hipólito Pérez, coordinator of the Committee for the Verification of the election of Delegates, read the minutes of the meeting that was held on the 7th September. The committee confirmed that the process of election of the delegates of the Administrative Units was valid. These minutes were approved by the assembly.

Brother Joe presented all 79 Chapter delegates to the assembly, according to regions and by Administrative Units. The 16 guests and other members of the support teams were also presented.

The capitulants then approved the proposal made by the General Council to accept as a guest Br. Vincent Abadom, Provincial elected of Nigeria.

Mr. Matthieu Daum was approved as facilitator of the Chapter, and the presence of members of the support teams in the Chapter Hall was also approved.

The third session of the Chapter was led by Brother Ben Consigli. He presented to the assembly the document entitled, The Chapter Process of the 22nd General Chapter. This document is the result of the work of the Pre-Chapter Commission for the Revision of the Regulations of the General Chapter. This document was proposed to replace the text previously known as “Chapter Regulations”.

The first day of the Chapter ended with A Eucharistic celebration, presided over by Franciscan Father Rodrigo Hernández.