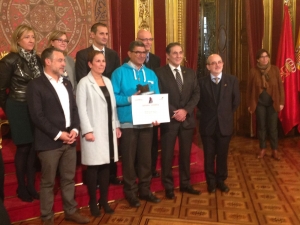 Marist Brother Georges Sabe, from the Marist Mediterranean Province, on December 2 received in Pamplona (Navarra) the ‘International Award Navarra to Solidarity 2016’ for the work which the Blue Marists carry out in the city of Aleppo, Syria, in which they risk their life in taking care of the victims of the war, both those who are resident there in the city of Aleppo as those displaced from other zones of the country.

At the moment of granting this award, the jury has taken into account their work and that of the volunteer persons who work with them in networking with other Christian, Muslim and non-denominational Organizations, as well as the fact that they have remained in Aleppo once the war began, continuing in this way their long path of attention to the vulnerable population.

Brother George, who thanked for the granting of the award, hopes above all, that this will serve to awaken consciences regarding this critical situation, lived in Syria and the need to reach an international agreement so that violence will cease.   “The war in Aleppo is a new wall of shame, similar to that of Berlin, but with the aggravating result of deaths, of the separation of many families who have remained separated.  We have to obtain that this war ends”.

The Blue Marists wish to allocate the donation of the Award, 15,000 Euros, to programs of humanitarian and emergency help for the refugees of the Syrian conflict, as well as for educational programs for children, boys and girls.

Brother George, who received a warm, enthusiastic acclamation from the assisting public, spoke about his denomination of Marists, as well as the complement of Blue, which he has acquired, because this is the way that in July 2012 the children began to call us in Aleppo.  “We have the charism of Marcelin Champagant as a point of reference in everything we do.   And, when the war broke out in Syria, we were collaborating in a Center with the children in Aleppo and we wore blue T-shirts and, since then, they identified us with them: ‘The Blues help us to study, the Blues help us when there is an attack,  the Blues play with us, in spite of the bombs… And it seemed curious to us and at the same time illustrative, since the first Marist Brothers, during the first years of foundation, wore a blue jacket”.

The International Award Navarra of Solidarity, jointly granted by the floral Government of Navarra and the Banking entity Laboral Kutxa, distinguishes those institutions, organizations or persons that stand out in any of the aspects of international cooperation.

The candidature of the Blue Marists for the International Award Navarra of Solidarity was presented by the ONGD Solidarity, Education and Development (SED)