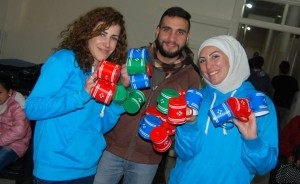 Today, June 19, 2015 is the first Friday of Ramadan… This morning, the streets were practically deserted.  Everybody was still sleeping. The Muslims who fast stayed up late at night in order to be able to eat breakfast before the prayer at dawn which announces the beginning of fasting.

Today we distributed the monthly food basket to displaced families according to the project « the Basket of the Blue Marists ».  The mother of Douha did not come.  In fact, little Douha, five years old is in the hospital St. Louis since Sunday, being taken care of according to the project « Civilians wounded in war ».  She was seriously wounded in the head and hand by the explosion of the shells.  Her family lives in one of the more dangerous neighborhoods of the town. They are poor.  They do not have many means.  In fact they do not have everything they need. That neighborhood is the less expensive.  The last house where they were living until Sunday morning was the house of an aunt. These past three months, they have been displaced two times, always in the same neighborhood, running a great risk… At every shell which fell and destroyed part of the house, they had to take refuge elsewhere. Douha should return to the neighborhood and live in the same conditions of insecurity!

For her and for many children like her we have launched the educational project « I want to learn ».  Like her, several children of our different projects, as well as their parents are daily threatened, by the shooting.  I think of Hiba who goes to meet all her family of eight persons on the street.  In all those families, we find… the same fears… the same threats… the same anxiety… especially when they are stirred up by the rumors… “They are going to enter… They have already taken such a neighborhood, such a street… We have seen them, we have seen their flag, we have heard their cry… We have seen them pass by”… But these are only rumors announced by prophets of misfortune or ill omen…

Well, yes, behold Aleppo, a city wrapped or steeped in the rumors of a possible invasion by the armed groups.  It is as if it was not sufficient for the people to live under the threat of the shooting of the mortar shells and that it was necessary also to live the anxiety and concern for tomorrow.…

With a hand full of all these questions we, the Blue Marists, feel obliged to be bearers of Hope.

When you, the friends of the whole world, you contact us to receive news from us or to show your solidarity and your support, we can breathe, we recover our strength and we are encouraged to continue on the road no matter how hard or difficult it may be…

This evening, I think of all our Muslims friends for whom fasting is the time to return to God and man, to the whole man, especially the more miserable one, the poorest. It is the time of “Zakat”. The alms… «‘iftar », the meal that ends the fasting.

I think of my pious, devout Muslim friends who pray and convert their heart. During the «Ramadan», the whole rhythm of life changes. All the stores, all cultural and play activities turn around the Ramadan… 29 days during which life is transformed into worship and faith.

In Syria, the «Ramadan» is an occasion to share, to open oneself to others: the neighbors, the relatives, the friends… I have always been edified by every person who fasts… The mother of “Kosai” 5 years old came to plead with me to convince him not to fast.  We reached an agreement: one day on two…

In the Eastern tradition, to wish the Muslims a good Ramadan, we tell them: «Mabrouk Ta3itkon» … «May God bless your obedience».  It is the time to adjust the rhythm of life to the rhythm of faith… An example… a model in this third millennium! 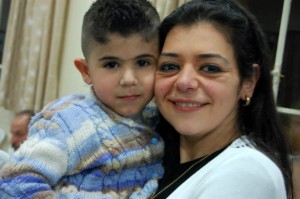 Our Muslim friends have always respected that their Christians compatriots do not fast. Nothing is imposed on Christians… the latter are free to live their life and faith in the pure Christian tradition, without any threat or tax to be paid.

We were far from any fanaticism that imposes one only view, one only glance, one only way… Since we are far from that extremist world foreign to our history and our cultural tradition… we have always respected the faith, culture and the traditions of others.

In this great world that seeks some sense, to propose God, live of their Faith and commit oneself for man are an eloquent witness of the values which give sense.

Our Brother Emili, Superior General, wanted to present the Blue Marists as models of an evangelical presence in the frontiers.  We told him that we are not heroes and that our choice corresponds to an interior call.

The house of the Marists is full of activities for the children, the young and the adults. We are not idle, unemployed. The holidays are the occasion to open our doors, launch activities in the open air… allow the monitors to make the experience of the other and allow the children to breathe and enjoy joy and friendship.

We wish to share with you a new project of which we were the initiators and therefore, we are responsible for it. In coordination with the other 19 Christian charitable associations of Aleppo, we have launched the project «drop of milk». More than 3000 Christian children who are less than 10 years of age have profited for the past two months of a monthly distribution of powdered milk or its equivalent for the children who are less than one year of age.

The other projects continue. The last program of MIT consists of 4 sessions of formation.

We prepare packages of new clothes for the 200 families who celebrate the feast of Fitr.

Several wounded by mortar shells and by bullets are taken care of in the Hospital St. Louis.

The baskets of food are distributed regularly. All those who profit of this appreciate the quantity and the quality.

I profit of this occasion to thank all our friends and all our benefactors without whom we would not have been able to help the more destitute families of Aleppo.

In leaving you, I leave you this text of our friend Father Jean Debruynne taken from the « Three daughters of Wisdom », a theatrical game written for the Guides of Aleppo: «Perhaps it will be today; perhaps it will be tomorrow that a new day will tell us yes and will open its two hands… Listen, see, I hear a step.  He will come tonight, perhaps the One whom we did not expect.  We will see Him appear».

Our hope will not falter!

Happy holidays to all of you. Keep Aleppo and its people present in your prayers.