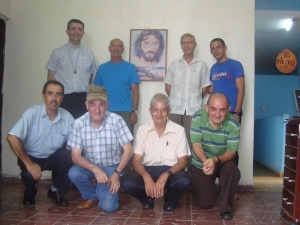 One of the countries of which very little is spoken about is Cuba, the place where the Marist Brothers arrived in 1903.  They left the country in 1961, where they had ten schools and Villa Marista, when the Government nationalized the schools.

Cienfuegos, was the city where the great educational work of the Marist Brothers began, followed by Caibarién, the neighborhood of Snake in Havana (the largest school, with 1700 pupils in 1961)); Ciego de Ávila; Camagüey; Cárdenas and Matanzas, both ended in 1942; the neighborhood of Cerro in Havana and Holguin.

The foundation of the first Champagnat School in Santa Cruz was in 1933, in an old large house; at the end of 1937 the construction of the school was begun in a piece of land acquired in the corner formed by the Street Buenviaje and the Street Union, just in front of the Church of Buenviaje, today the Diocesan Shrine of the Virgin de la Caridad del Cobre.  In 1962 in Santa Clara there were 55o pupils. 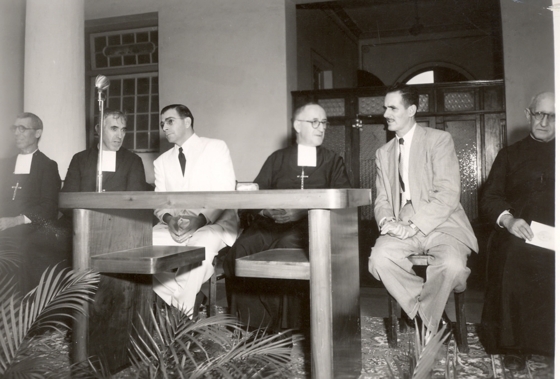 Villa Marista then became the See of the Marist Cuba-Central America Province in 1949 and it became necessary to enlarge the house.  The Scholasticate of the Province, which had been in Spain until then, was transferred to Villa Marista in 1956.

In October 1960, seeing how things were developing in the situation in Cuba, the Seminarians were sent to Guatemala and Spain and a few months later the Scholastics were also sent to Spain, Guatemala and El Salvador.   In June 1961 only three Brothers remained in Villa Marista who were expelled from there in September of the same year.   In the middle of the year 1961, the private schools of Cuba were taken over; the majority of the Brothers migrated to Latin America and Spain because of the Spanish language.

Little by little groups of Cuban former pupils began to be formed in Miami, New York, New Jersey and Chicago.  The Group ‘Marist Former Pupils of Cuba in Exile” was one of the first ones, and has been the largest since it was formed in 1967.  Its first executive meeting had place in 1970.

In 2003 the centenary of the Marist foundation in Cuba was celebrated in Miami.   It was a very well-attended event by many Cuban former pupils from all parts.  Besides, 22 Brothers came from eight different countries who had served in Cuba.   The solemn Marist Mass which closed the activities of the centenary in 2003 was presided over by the actual Bishop of Holguin, Cuba, Mons. Emilio Aranguren, former pupil of Santa Clara.

The Marist re-foundation in Cuba coincided with a particularly difficult period of time for the Cuban people.   In 1998, Pope John Paul II visited Cuba and pronounced that famous phrase that gradually has been fulfilled: “That Cuba opens itself to the world, that the world opens itself to Cuba”.  It is in this framework that the General Council decided to have the Marists present in the Pearl of the Caribbean.

In the month of May 1993 the General Council decided to make the foundation of the mission of Cuba.  A first missionary group was formed by seven Brothers ready to enter the country when the authority would grant the permission.

This permission delayed eight years to arrive until finally the greatly desired permission arrived in the year 2001, but only for two Brothers. Later, one after another the other permissions arrived. It was like this that in 2001 Efrain and Carlos entered, Hector in 2003, Salvador in 2005, Jesus and Carlos in 2007, and German in 2010.

The first foundation was made in the Diocese of Cienfuegos; it was Mons. Emilio and another Marist who made the petition to the Government, to collaborate in a preferential way in the Christian education of children and young people and in the formation of the Laity.

In the year 2004, the community of Cienfuegos became a formative community, first for the stage of Aspirants and then for the Postulancy, accompanying three candidates.

In 2007 it was possible to open a second community, on this occasion In the neighborhood of Cotorro of Havana because this city was where the greater part of the Congregations have the Postulants, Novices and Juniors.

At present the Marist presence in Cuba has two communities, one in Havana and the other one in Cienfuegos. Cuba belongs to the Province of Central America.