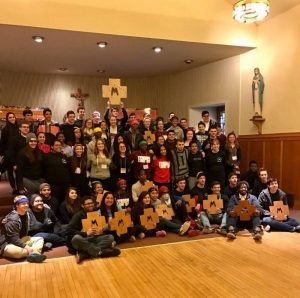 Students gathered for the annual ‘La Valla Weekend’ retreat at Esopus, New York, from March 24 – 26 during which they heard the testimonies of Syrian refugees and had a simulation experience of what it could be like to be a refugee.

The students – from 11 Marist schools – took part in a simulation programme designed to create awareness, experience emotions and encourage them to be comfortable taking action on behalf of refugees.

On March 24, they heard the testimonies of a Syrian family of four from Aleppo who was part of the Blue Marist community for several years before moving to New Jersey last October.

They also heard the experience of Tomas O’Riordan, a Marist volunteer who spent the month of January working with refugees in the city of McAllen, Texas, on the border of Mexico.

On March 25, former general superior Brother Sean Sammon, reflected on the exploitation of children and how the Institute is helping fight these abuses in the United Nations Office of Children’s Rights.

The retreat ended with preparing the students for the Marist National Day of Service, held on March 29, and presenting each school with a handmade Marist cross to pray with on that day.