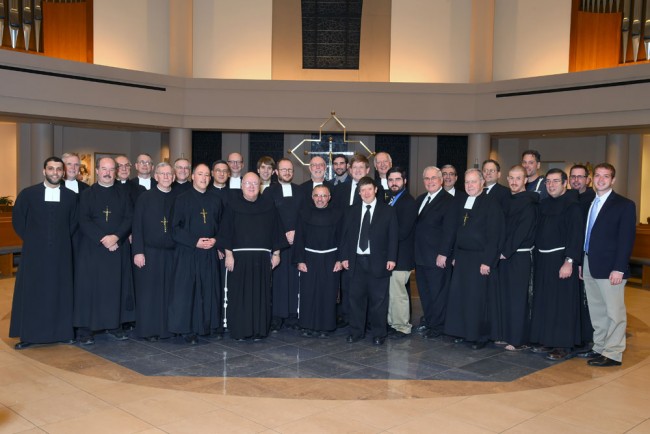 As we close the Year of Consecrated Life and anticipate the World Day For Consecrated Life, St. John’s University Campus Ministry sponsored its first annual Brothers’ Nite at the 5:30 Student Mass this past Sunday, January 31. The main purpose of Brothers’ Nite was to let the students see, meet, and pray with a number of Brothers. Representing six different Congregations, 29 Brothers gathered together in the University Church of St. Thomas More. To further mark their presence as well as their identity, many of the Brothers wore their traditional religious habits. Present were: the Marist Brothers, the Brothers of the Sacred Heart, the De LaSalle Christian Brothers, the Marianist Brothers, the Brothers of Holy Cross and the Franciscan Brothers of Brooklyn. The event was coordinated by Marist Brothers, Mike Sheerin and Sam Amos who gave a reflection on their vocation call after communion. Comments made by the SJU students included: “I have never seen so many Brothers in one place – very inspiring.” “The Brothers are alive and well… who knew!!” “Hey…you guys  (Brothers) nailed it!”