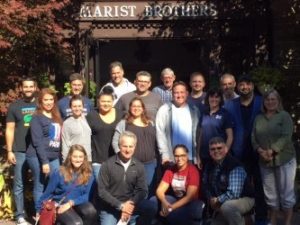 The first Sharing Our Call of the year was held at Esopus on Oct. 16-18, with 20 participants from 7 schools, as well as the MBCE and the Province Communications Office. Central Catholic, Mount St. Michael Academy, Marist Bayonne, Christopher Columbus, St Joseph Academy and Marist Chicago all were represented.

It was particularly exciting to have Marist Eugene (Oregon) join us, as they seek to possibly re-connect with the Marists of the USA. President Suzanne Graf and Campus Minister Rick Martin were happy to be here, meeting colleagues from around the country. Religion, language and math teachers, IT and Development Directors, as well as administrators all were represented. Our thanks to the presenters, who all had quite an impact on the participants. They included  Br.Dan O’Riordan, Br. Don Bisson, Br.Hank Hammer,Ms Alice Miesnick, Br Al Rivera, Mr. Bob Linfors and Mr.       Matt Fallon. A few support people were on board, including Br Todd Patenaude, Br. Peter Guadalupe, and Br Joe Matthews. Of course, Henry kept everyone well fed, with Br. Dan’s assistance in the kitchen. Br. Owen extended the usual excellent hospitality of the MBCE. Evaluations at the end confirmed this – “I felt that everyone made me feel as if I were at home.”