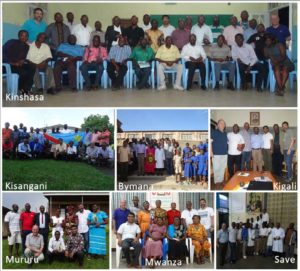 For two weeks, from May 29 to June 12, the members of the Secretariat of the Laity – Pep Buetas and Brothers Sylvain Ramandimbiarisoa and Javier Espinosa – visited a large part of the communities of the East Central Africa Province (PACE). The visit’s goal was to get to know the reality of the lay groups and the Province’s possibilities for a path of communion, as well as to motivate the initiation of experiences or reaffirming processes.

They were intense days marked by several hours on airplane, boat, minibus or car. There was an immense amount of water on the Congo River, Lake Kivu and Victoria. A bright and hot sun. Vegetation areas, others that were very dry. Flat, paved and dusty roads, beyond recognition. Green hills and yellowish savannahs. Many children with big eyes and a striking smile. Welcoming communities, with a fraternal and Marist spirit. Brothers and lay people joined by the same charism. And this echo continued throughout the presentations of the laity: I am married, I am a school teacher… and “I am a lay Marist.”

There was a variety of landscapes consistent with the diversity of groups with whom we met. Those who have travelled a long way, for others it was their first meeting. Some had a majority of lay women, others had a majority of lay men. In general, they were mostly adults; few groups had several youths. There were groups with former brothers, others with educators. Some had developed Statutes as a fraternity and association. Others, with a clear emphasis on solidarity. But all anxious to follow a formation process, to dispose of materials and to grow as Marists. And many questions that were born of hearts willing to continue with the intuitions of Champagnat. There was always a brother accompanying a group. The entire community of brothers was present in one of the meetings with the lay fraternity. In another visit, the community itself arranged a fraternal dialogue with us. One of the groups finished the encounter with the very vital expression of singing and dancing.

What strength and vitality! We had the opportunity to participate during two days of the celebration of the novena leading up to the feast of Champagnat in the house of the families of a group. It was a simple and prayerful encounter, with the family’s children and in the silence of the sunset. The challenges that appeared form part of the visit: like the challenge of formation, of accompanying groups on behalf of the brothers, network communication among the Province’s groups, of discovering the richness of this path for the Brothers’ vocation, of the possibilities of enrichening the charism with new nuances. The call for a regional process of mutual support also appeared, feeling at the same time to be in communion with the process of the Institute.

Now speaking of Kinshasa, Kisangany, Bobandana, Goma, Mururu, Save, Byimana, Kigali and Mwanza, we recognise more faces of brothers and lay people, who also look to the future as a communion of hearts, promoting a new beginning.