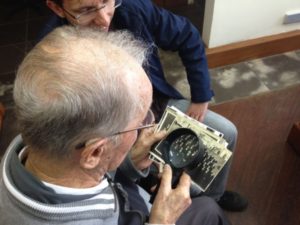 A memorial dedicated to Saint Marcellin Champagnat in Viamão, Brazil, has now around 1,800 objects and 24,000 photographs – a number that continues to change due to donations.

With the help of the Museum of Science and Technology of the Pontifical Catholic University of Rio Grande do Sul, the Brasil Sul-Amazonia Province helped identify and number the memorial’s objects as part of an updating process, which began in April 2015.

“We still have to continue to build a mentality that appreciates historical assets in society at large,” stated Brother Jean Arcari, coordinator of the process and historian.

“This is one of our commitments because of the importance of Catholicism in the history of our country and in our state,” he added.

A museologist that makes up of the team in charge of updating the memorial, Gabriela Carmo, revealed that the museum includes several teaching resources the Brothers used throughout history such as slates, ink cartridges, pens, overhead projectors and microscopes.

Other objects worth mentioning include drawings that the Brothers used to teach – one of them in the old Marist school Colégio Marista São Francisco, in Vacaria in the 1940s and 1950s and had been made in Paris.

The paintings were teaching tools of the second half of the nineteenth century and early decades of the twentieth century.

The memorial, part of the Center for Marist Heritage and Spirituality, was created 18 years ago, an idea of Brother Armando Luiz Bortolini.