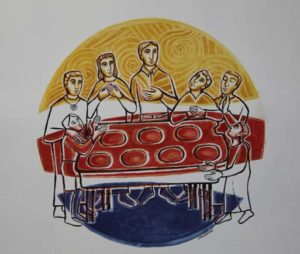 On January 2, 1817 Marcelin Champagnat opened the door of the first Marist community in a simple little house of La Valla, in France. Two boys were the first ones who became passionate for the proposal to educate children and young people, following the style of Mary. During the past 200 years many doors have been opened with the Marist key and today we find Marist Brothers and Laity, in the whole world. This is why we invite you, who feel yourself a Marist, to celebrate this resounding and great anniversary.

On Monday, January 2, 2017, at dawn as soon as the sun comes out, we suggest you to pray, saying “Good morning” in tune or union with the Marists of the five continents. Like Jesus, “in Capernaum, when daylight came, he left the house and made his way to a lonely place to pray” (Lk. 4, 42).

From: wherever you are – in the house or in an emblematic place, whether alone or in company, with the family or the community. The suggestion is to profit or take advantage of the dawn of a new day to connect ourselves with persons who vibrate with “one same heart, and the same spirit”; a new day, a new Anniversary, a new Beginning, a new opportunity to grow and to love.

We suggest you take a simple and peaceful moment. Look for a place where you feel at ease, comfortable, (a room, a chapel, a mountain, a bench in the city square…). Breathe, sing, look, listen, ,light a candle, place a Marist symbol at your side… and read this letter that arrives to you following a tradition of Father Marcelin himself.

He had the good habit of sending circular letters to the Little Brothers, and among these letters the greetings for the New Year were never missing. Imagine that today you receive this circular letter for you.

I hope you have a very good Marist Day. Today we celebrate two-hundred years of a dream. This was a dream that gradually took form, little by little, in a humble home and with very simple persons. This is a dream which two-hundred years later continues to be alive in the heart of thousands and thousands persons of very diverse cultures. Congratulations! Greetings because you form part of this Marist Family which is journeying with the will of transforming the world by accompanying children and young people. Congratulations because you have allowed yourself to be touched by the message: “May charity always reign among you. Love one another as Jesus has loved you; that you may have one same heart and one same spirit. Hopefully it can be said of you, Marists: Look, how much they love one another!”

In this new daybreak, we thank our Good Mother for the gift that God has given us with the Brothers and the Laity, the educators, the fathers and the mothers, the children and the young people who here, and in the whole world, live happily the Marist charism. In the same way as 200 years ago, today we open the doors of our lives so that the dreams may become a reality. Let us hope to be able to share and make them a reality with more brothers and sisters on the way, and that our Good Mother accompany us with the force of her tenderness.

With the dawn of this new day, we renew the hope that a new world is possible and that we want to begin it here and now, in union and in tune with the Marist Family of the five continents. Today, that once again “God makes the sun rise for everyone” (Mt. 5, 45), fill your life and that of those around you with light, especially that of those who need it the most. Persevere in the vocation of being honored citizens and good Christians”.

The Marist Institute was not born once and for all on January 2, 1817, but it continues to be born today. What a wonderful task it is to collaborate, two-hundred years later, in the birth of an Institute, which is always unfinished! Let us always love one another! And this during many years!

The prayer may be finished with a hymn or a Marian prayer.

And now go to the nets! Finally we invite you to hang a photo of this moment on the nets with the common hashtag #MillionMarists.