Pope Francis arrived at a school in New York’s East Harlem on Friday to chants of “Holy Father, we love you!”

The children sang the “Prayer of St. Francis” in English and Spanish, as the pontiff entered the building. Inside, a group of third- and fourth-graders showed him school projects they were working on that align with his focus on the environment.

Speaking later in the school gym, he shared an inspiring message.

“It is beautiful to have dreams and to be able to fight for them. Today we want to keep dreaming,” said Francis, evoking the words of Rev. Martin Luther King Jr. “We celebrate all the opportunities which enable you, and us adults, not to lose the hope of a better world with greater possibilities.” 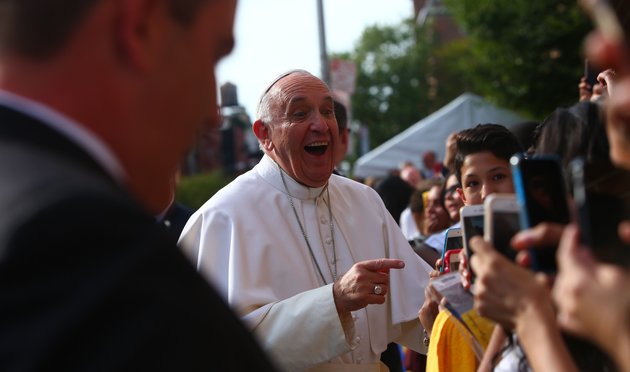 NEW YORK, NY – SEPTEMBER 25: Pope Francis greets guests upon his arrival at Our Lady Queen of Angels School on September 25, 2015 in the East Harlem neighborhood of New York City. Pope Francis is on a six-day trip to the USA, which includes stops in Washington DC, New York and Philadelphia, after a three-day stay in Cuba. (Photo by Eric Thayer-Pool/Getty Images)

The pope noted that many of the students at Our Lady Queen of Angels and three other local Catholic schools represented at the event come from minority and immigrant communities.

“I know that it is not easy to have to move and find a new home, new neighbors and new friends,” the pontiff said. “The good thing is that we also make new friends. We meet people who open doors for us, who are kind to us. They offer us friendship and understanding, and they try to help us not to feel like strangers. To feel at home.”

About 70 percent of the students at Our Lady Queen of Angels identify as Hispanic, while 22 percent identify as African-American. Sixty-nine percent qualify for need-based scholarships, according to The Partnership for Inner-City Education, a school management organization that operates six Catholic schools in Harlem and the South Bronx.

After talking with the young children, the pontiff headed into the gym where immigrants and refugees were gathered to hear his message of hope. The men and women — who hailed from Mexico, Peru, Ecuador, Honduras, India, Pakistan and parts of Africa — are clients of the archdiocese’s Catholic Charities program. Among them were day laborers, car wash workers, immigrant mothers and a group of unaccompanied minors who crossed the border without their parents and helped start a soccer league in the Bronx.

Francis received gifts from representatives of different immigrant groups, including a book of stories by diaspora communities in New York City. He had brought Our Lady Queen of Angels a wooden sculpture of the Virgin Mary with an infant Jesus.

At the end of his brief address, which he delivered in Spanish, the pope asked his listeners for their help. “Please don’t forget to pray for me, so that I can share with many people the joy of Jesus,” he said.

He also asked them to sing for him. Two different groups of immigrants obliged.

Monsignor Kevin Sullivan, executive director of Catholic Charities, said the pope’s visit to East Harlem was “his most important stop.”

The school is connected to the now-defunct Our Lady Queen of Angels parish. The church closed down in 2007 as part of the New York archdiocese’s reorganization and consolidation, which was prompted by declining attendance and a shortage of priests. A group of former parishioners who still meet outside the church on Sundays hope the pope’s visit will bring attention to their efforts to re-open the house of worship.

After the East Harlem visit, Francis heads to Madison Square Garden to celebrate Mass. Heflies to Philadelphia on Saturday morning, where he will address immigrants gathered at Independence Mall, visit inmates at a local prison and lead two Masses on Benjamin Franklin Parkway. He heads back to Rome on Sunday, Sept. 27.