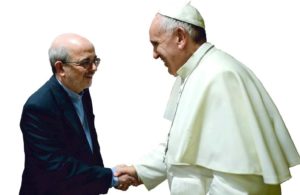 Pope Francis received general superior Brother Emili Turú at the library of the Apostolic Palace on April 10, in the context of the Institute’s celebration of the Bicentenary.

During the encounter, which began at 10am, Br Emili gave the pontiff a book of photographies of the Fratelli Project in Rmeileh, Lebanon, taken by Marco Amato in 2016.

In turn, the holy father thanked him and made a dedication in a volume for the collaborators of the Project. He also sent a special blessing to the Blue Marists of Syria.

Pope Francis delivered a message to the Marists of Champagnat, which will be published in a few days.