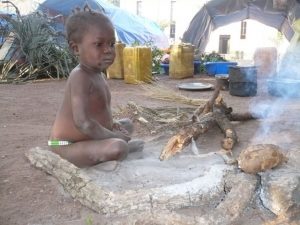 Over 5,000 people have sought refuge in a compound of the Solidarity with South Sudan project, where Marist Brother Christian Mbam and three religious sisters of different congregations live in Riimenze, to escape the violence of both rebels and the government’s army.

As of Jan. 26, there are 5,056 internally displaced people that have arrived to the camp with the hope of receiving shelter, food and health care as numbers continue to rise daily.

They began fleeing their homes after government soldiers burnt their houses and killed people along the road between Yambio and Riimenze on Jan. 1.

The soldiers had assumed they were sheltering or supporting the Sudan People’s Liberation Army guerrilla since the guerilla had tried to recruit new members in 2016.

Executive director of the Solidarity with South Sudan project, De La Salle Brother Bill Firman, told the Marist Brothers communications office that “there is far too much fear in South Sudan.”

“All these people want is to return to their simple homes and live in peace (and) we support that,” he wrote on Jan. 29. “I suspect that what has happened in Riimenze has happened in other parts of South Sudan but it is not being reported.”

He stressed that “all the Government has to do is allow the people to go back to their homes and to their subsistence agriculture and for the rebels to leave them alone.”

Br Bill, based in Juba, affirms neither the rebels nor the government soldiers have threatened members of the project at the compound nor their large farm, which includes animals. It is believed neither of them will go inside the compound.

Solidarity with South Sudan (www.solidarityssudan.org) – a partnership with over 23 religious congregations – is located in Riimenze, Wau, Yambio and Juba. It was initially set up to train teachers, nurses, midwives, local farmers and community leaders, but is now having to feed and look after internally displaced people.

“It is not the mission we planned but it is the one that now confronts us,” stated Br Bill, who knows many of the victims. “We pray that the local people may be allowed to go home before the wet season sets in.”

Project members have set up a temporary clinic with a nurse, a midwife and two helpers. The “tukuls,” which are traditional kitchens, are now used for the mothers and babies after delivering or for those who are very sick needing drips.

They have also built 16 bathrooms with cemented floor and iron sheets around, as well as four toilets. Drinking water has been provided every day in plastic containers as much as possible and Médecins Sans Frontières is visiting to hand out powder to purify the water and vaccinations, and other NGOs are getting involved.

A visitor told Br Bill that “there is still lot of fear as rebels and soldiers sometimes come or pass the camp and every evening smoke is blowing to every corner in and outside the camp like light clouds.”