The first time I visited the Sistine Chapel, I spent so much time straining my neck, gawking upwards at Michelangelo’s epic biblical masterpieces, that I completely missed the frescoes which adorned the side walls. So I resolved to return and I’m glad I did!

My second visit gave me the opportunity to see the works of other Renaissance artists whose talents were no less magnificent. One fresco which caught my eye was The Vocation of the Apostles by Domenico Ghirlandaio, painted 1481-1482. 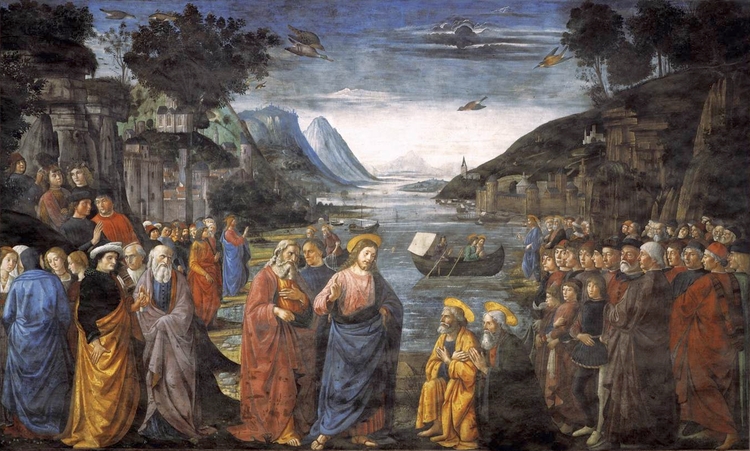 The fresco captures three separate scenes from the Gospel of Matthew (Mt 4:18-22), where Jesus calls the Apostles. In the first scene, Jesus stands at the shore of Lake Galilee calling out to Peter and Andrew who are casting a net from the side of their boat. In the second scene, Jesus is on the other side of the shore with Peter and Andrew behind him, beckoning to James and John as they return in their father, Zebedee’s, fishing boat with the catch of the day. Finally, in the third and central scene, Jesus blesses Peter and Andrew, dressed in brilliant colours of yellow and green, and invites them to follow him in a new life of discipleship. Ghirlandaio’s work, in all its rich colour and texture, is an extraordinary piece of High Renaissance artwork.

Yet while the artist captures the Apostles’ call in such vivid style, we know the unfolding reality of their vocation was less than perfect. There’s no fresco in the Sistine Chapel entitled Jesus wept or Jesus rebuked them, capturing those moments of sheer frustration which the Lord must have experienced with some of his rag-tag followers. This was brought home to me at a recent conference where one of the speakers gave a quick run-down on some of the less-than-impressive character traits of individuals whom Jesus called. These included: uneducated, unrefined, religious zealot, spender of communal funds, doubter, fiery temperament, sceptic and overly ambitious.

And yet Jesus looked at them, loved them and called them. Despite their weakness, he saw their potential to share in his saving mission. Aware of their limitations and not knowing the future, they responded to his love. As Saint Paul says; ‘God chooses the seeming foolish things of this world, to confound those who are wise in their own eyes’ (1 Cor 1:27).  How well these words resonate in our own Marist story, especially among the early disciples St Marcellin gathered around him. As I reflect on twenty-five years as a Marist Brother this year, I continue to be both humbled and amazed at what God has done, especially through the work of some very persistent formators who were able to see past my own limitations!

To say ‘Yes’ to God’s invitation to live our vocation today is to rely on the grace of the Holy Spirit working in us, transforming us and leading us ever deeper into a loving relationship with our God. From what other source can we be nourished to go out as Marist disciples and bring Christ to the world? 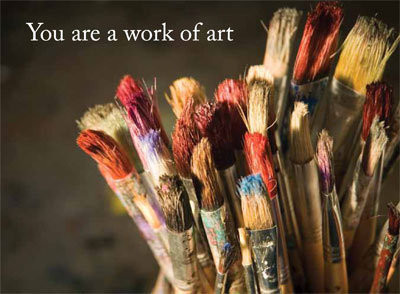 Saint Paul also reminds us, ‘You are God’s work of art!’ (Eph 2:10). While we rejoice in the good work God is doing in and through us, let’s be on the lookout to nurture the next generation of Marist disciples God is calling; the younger ones in our schools and wider communities who might simply need a word of encouragement or affirmation to consider an invitation to be part of this amazing Marist canvas!