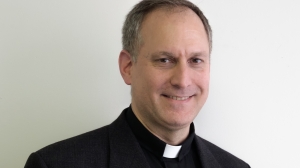 The newly ordained bishop of Montreal – Canada’s second largest city with a population of over four million – said the Marist Brothers helped his faith blossom.

According to an article by Canadian Catholic News dated April 26, Bishop-elect Alain Faubert’s faith grew while attending a private boys’ school run by the Brothers – Collège Laval – at the age of 14.

Pope Francis appointed him auxiliary bishop of Montreal on April 19 and he was ordained on June 15 in the Mary Queen of the World Cathedral in Montreal.

In the article, he states he had a life changing spiritual experience at the school on Sept. 1979 during which he reveals he heard Jesus tell him, “Alain, I know you. I love you.”

Alain began to take classes with a Marist Brother who started a prayer group and was “quite a challenging guy” and “in your face.”

He later went on to serve for 10 years as a summer camp counsellor at Camp Marist in Rawdon, Quebec, where he realised that the children there “needed to be loved.”

“That is so much part of the Marist spirituality, to be with them, to listen to them, to care for them,” Alain remarked.

He went on to study at L’École Polytechnique de Montreal, an engineering school, but he had what he calls an “existential crisis” at the age of 20.

In Sept. 1986, Alain travelled to Haiti where he taught French, English, mathematics and catechesis with the Marist Brothers. There, the faith and resilience of locals who lived in extreme poverty greatly moved him.

He noted that he could have stayed in Haiti and become a Brother, but he felt a calling to return to Canada.

Encouraged by one of his priest friends, he entered the Grand Seminary in Montreal in Sept 1987 and studied philosophy, theology, a Masters and then a doctorate after having been ordained a priest in 1995.