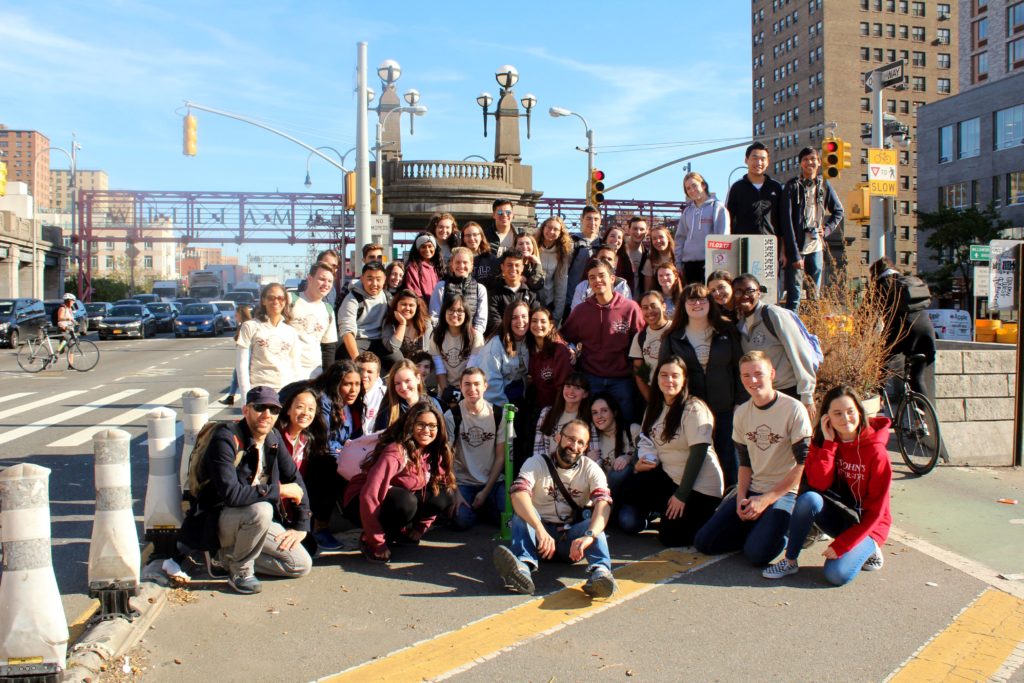 14 years ago, Mr. Chris Dougherty ‘91 and the senior class started a new tradition as an offshoot of the annual Walkathon. The World Trade Center Walk is an 11 mile trek from the steps of Molloy to Manhattan’s Financial District. The route takes seniors and faculty chaperones along Metropolitan Avenue through Forest Hills, Middle Village, Ridgewood, and Williamsburg. Mr. Dougherty then leads everyone over the Williamsburg Bridge, through Chinatown, and finally to the World Trade Center. This year approximately 43 seniors and four chaperones took part in the WTC Walk. We began at 9:30 AM and arrived at the World Trade Center at 4:30 PM (including time allotted for stretching, breakfast, and lunch breaks along the way). (Pictured above: Group shot after crossing the Williamsburg Bridge. Pictured below: Left – Nearing the 6 mile mark, with the WTC in the distance. Middle & Right – Crossing the Williamsburg Bridge)

The walk is inspired by the life and memory of Br. Leo Richard, a beloved guidance counselor and founder of the SMILE program. Br. Leo once completed a WTC Walk of his own…and even walked BACK to Molloy (for those not counting, that’s 22 miles)! He was well known as a communicator who was impeccable at reaching students who were struggling in school, personally, or socially. “Br. Leo knew that out of the many ways to reach a kid, going on a walk allowed for a more free flow of thoughts and feelings. Plus, he was a very active guy,” explained Mr. Dougherty, who was once a Peer Group Leader for Br. Leo. Mr. Dougherty is also currently the Guidance Department Chair and heads the iconic SMILE program. College Guidance Counselor Mr. Ted McGuinness ’81 and Guidance Counselor Br. James Norton ’63 (a close friend of Br. Leo) have also been integral to the history of the walk, participating many years with great enthusiasm.

Though much of the walk is full of laughs, smiles, and friendly banter, Mr. Dougherty does well to draw everyone in for reflections along the way. The first takes place outside Fox Funeral Home in Forest Hills (pictured above left). The funeral home was the location of services for Br. Leo after his passing in 1995. Countless Stanners paid their respects to Br. Leo then, and Mr. Dougherty has continued to do so with the students of today. During the reflection, Mr. Dougherty asks everyone to pause and think about why they are walking, and to think about how someone like Br. Leo has inspired them in their lives. The second reflection takes place at the World Trade Center itself (pictured above right). Mr. Dougherty again asks everyone to lower their heads, close their eyes, and pray for the victims of the attacks on September 11, 2001. We’ve reached a time when many of Molloy’s students have little to no memory of that day, making it increasingly more important to create awareness for the magnitude of what happened so close to home.

In summation, I can honestly say the World Trade Center Walk is among the most enjoyable experiences I’ve ever had at Molloy. The walk felt epic, the students provided plenty of enthusiasm, and Mr. Dougherty does an amazing job picking just the right spots for students to grab a meal. In my opinion, Br. Leo is smiling down on Mr. Dougherty and our students. There’s no one more worthy of carrying on this amazing, beautiful tradition. I end with words from Mr. Dougherty: “Once in a while we should stop and smell the roses. We can be so busy, especially in a city like New York, so it’s a wonderful thing to be able to walk through three boroughs with friends, all in memory of a legendary Marist Brother whose Peer Group & SMILE counseling programs have inspired so many Molloy students.”