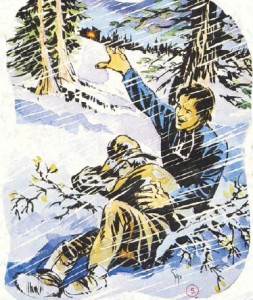 In February 1823, Marcellin learned that Brother Jean-Baptiste in Bourg-Argental had come down with a serious illness.

Concerned about his condition, the young priests set out on the twenty-kilometre journey across rough countryside to visit him. Brother Stanislaus was at his side.

On their return trip, walking through the heavily timbered territory, the two men were caught in the full fury of one of the region’s snowstorms.

Both were young and energetic, but hours of wandering lost on the slopes of Mount Pilat led eventually to exhaustion.

Stanislaus had reached the limits of his stamina. Night set in; the possibility of death in the snow increased with each passing hour.

Both men turned to Mary for help and prayed the Memorare.

Within a short while, they spied lamplight, not too far away in the distance.

A local farmer, Mr. Donnet, had left his house to enter a nearby stable.