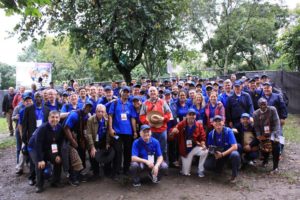 On 9 September, the capitulars joined Colombian religious, seminarians, priests and their families in a meeting with Pope Francis, who ends his visit to Colombia Monday, 11th September.

Before the trip to Medellín, there was a morning working session, which began at 9 am. Prior to the morning prayer, Brother José Sánchez Bravo, Provincial of Central Mexico, shared with the capitulants the suffering the Mexican people were experiencing with the damage caused by the earthquake that struck the southern region of the country. He emphasized the difficulties experienced by the community of Ixtaltepec, where there was damage both in the school and in the Marist residence.

After the prayer, which had as its theme, “Enter into a new country,” Brother Joe McKee introduced the work of the session was to be on the document,”The Chapter Process of the 22ndGeneral Chapter”, which had been presented to the capitulants on Friday. This document was proposed to replace the text previously known as Chapter Regulations. At the tables, the capitulants reflected on their first impressions, the strengths, what drew their attention and what is clear about the proposal by the Preparatory Commission for the revision of the Chapter Regulations.

The session ended with sharing on the reflection made at the tables.

Going to Medellín for the meeting with Pope Francis

At 11 am, the Chapter participants departed for Medellin to attend a meeting of religious, seminarians, priests and their families with Pope Francis. The meeting began at 4 pm in La Macarena, the old “Plaza de Toros”. The venue was filled near to capacity and alive with the joy and enthusiasm of a vast cross section of religious, seminarians and priests, all eager to listen to the Pope’s message.

In his words to the gathering, the Pope urged us to “remain united with Christ”, and to maintain a “vital relationship as an absolute necessity”. This meant not having a passive attitude, without any consequence in everyday life. He proposed three ways that would help us in this task:

Make us good stewards of all the gifts you have given us.