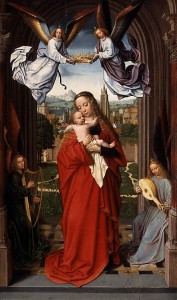 Angels seated at the feet of the Madonna and playing on musical instruments are most lovely and appropriate accessories, for the choral angels are always around her in heaven, and on earth she is the especial patroness of music and minstrelsy. Her delegate Cecilia patronized sacred music ; but all music and musicians, all minstrels, and all who plied the ” gaye science,” were under the protection of Mary. When the an-gels were singing from their music books, and others are accompanying them with lutes and viols, the song is not always supposed to be the same. In a Nativity they sing the Gloria in Excelsis Deo; in a Coronation the Regina Cadi; in an enthroned Madonna with votaries, the Salve Regina, Mater Misericordiae ! in a pastoral Madonna and Child it may be the Alma Mater Redemptoris.

In all the most ancient devotional effigies (those in the catacombs and the old mosaics) the Virgin appears as a majestic woman of mature age. In those subjects taken from her history which precede her return from Egypt, and in the Holy Families, she should appear as a young maiden from fifteen to seventeen years old.

In the subjects taken from her history which follow the baptism of our Lord, she should appear as a matron between forty and fifty, but still of a sweet and gracious aspect. When Michael Angelo was reproached with representing his Mater Dolorosa much too young, he replied that the perfect virtue and serenity of the character of Mary would have preserved her beauty and youthful appearance long beyond the usual period. (St. Peter’s, Rome.) 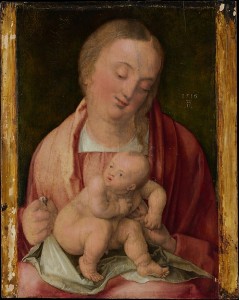 Because some of the Greek pictures and carved images had become black through extreme age, it was argued by certain devout writers that the Virgin herself must have been of a very dark complexion ; and in favor of this idea they quoted this text from the Canticles, “I am black, but comely, O ye daughters of Jerusalem.” But others say that her complexion had become black only during her sojourn in Egypt. At all events, though the blackness of these antique images was sup-posed to enhance their sanctity, it has never been imitated in the Fine Arts, and it is quite contrary to the description of Nicephorus, which is the most ancient authority, and that which is followed in the Greek school.

The proper dress of the Virgin is a close red tunic, with long sleeves ; 1 and over this a blue robe or mantle. In the early pictures the colors are pale and delicate. Her head ought to be veiled. The fathers of the primeval Church, particularly Tertullian, attach great importance to the decent veil worn by Christian maidens ; and in all the early pictures the Virgin is veiled. The enthroned Virgin, unveiled, with long tresses falling down on either side, was an innovation introduced about the end of the fifteenth century ; commencing, I think, with the Milanese, and thence adopted in the German schools and those of Northern Italy. The German Madonnas of Albert Durer’s time have often magnificent and luxuriant hair, curling in ringlets, or descending to the waist in rich waves, and always fair. Dark-haired Madonnas appear first in the Spanish and later Italian schools.

In the historical pictures, her dress is very simple; but in those devotional figures which represent her as Queen of Heaven, she wears a splendid crown, sometimes of jewels interwoven with lilies and roses. The crown is often the sovereign crown of the country in which the picture is placed : thus, in the Papal States, she often wears the triple tiara ; in Austria, the imperial diadem. Her blue tunic is richly embroidered with gold and gems, or lined with ermine or stuff of various colors, in accordance with a text of Scripture : ” The King’s daughter is all glorious within ; her clothing is of wrought gold. She shall be brought unto the King in raiment of needlework ” (Ps. xlv. 13, 14). In the Immaculate Conception, and in the Assumption, her tunic should be plain white, or white spangled with golden stars. In the subjects relating to the Passion, and after the Crucifixion, the dress of the Virgin should be violet or gray. These proprieties, however, are not always attended to. 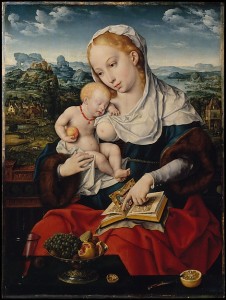 In the early pictures which represent her as nursing the Di-vine Infant (the subject called the ” Virgine Lattante “) the utmost care is taken to veil the bust as much as possible. In the Spanish school the most vigilant censorship was exercised over all sacred pictures, and, with regard to the figures of the Virgin, the utmost decorum was required. ” What,” says Pacheco, ” can be more foreign to the respect which we owe to Our Lady the Virgin, than to paint her sitting down with one of her knees placed over the other, and often with her sacred feet uncovered and naked ? Let thanks be given to the Holy Inquisition, which commands that this liberty should be corrected.” For this reason, perhaps, we seldom see the feet of the Virgin in Spanish pictures, or in any of the old pictures till the seventeenth century. ” Tandis que Dieu est toujours montré pieds nus, lui qui est descendu 4 terre et a pris notre humanité, Marie an contraire est constamment représentée les pieds perdus dans les plis traînants, nombreux et légers, de sa robe virginale ; elle qui est élevée au-dessus de la terre et rapprochée de Dieu par sa pureté. Dieu montre par ses pieds nus qu’il a pris le corps de l’homme ; Marie fait comprendre en les cachant qu’elle participe de la spiritualité de Dieu.” [While God is always shown barefooted, He who descended to earth and took on our humanity, Mary, on the contrary, is constantly represented with her feet lost in the trailing folds, light and ample, of her virgin robe, she who is lifted above the earth and brought close to God through her purity. God shows by his bare feet that he has taken the body of man ; Mary, by hiding hers, makes it known that she shares the spirituality of God.] Carducho speaks more particularly on the impropriety of painting the Virgin unshod, ” since it is manifest that our Lady was in the habit of wearing shoes, as is proved by the much venerated relic of one of them, from her divine feet at Burgos.”

The child in her arms is always, in the Greek and early pictures, clothed in a little tunic, generally white. In the fifteenth century he first appears partly, and then wholly, undraped. Joseph, as the earthly sposo, wears the saffron-colored mantle over a gray tunic. In the later schools of Art these significant colors are often varied, and sometimes wholly dispensed with.