Symbols and Attributes of the Virgin Mary 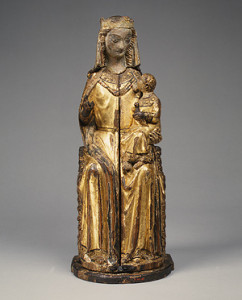 The difficulty of fully expressing this complex ideal, and the allegorical spirit of the time, first suggested the expedient of placing round the figure of the glorified Virgin certain accessory symbols, which should assist the artist to express, and the observer to comprehend, what seemed beyond the power of Art to portray, — a language of metaphor then understood, and which we also must understand if we would seize the complete theological idea intended to be conveyed.

I shall begin with those symbols which are borrowed from the Litanies of the Virgin, and from certain texts of the Canticles, in all ages of the Church applied to her : symbols which, in the fifteenth and sixteenth centuries, frequently accompany those representations which set forth her Glorification or Predestination ; and, in the seventeenth, are introduced into the “Immaculate Conception.”

1. The Sun and the Moon. “Electa ut Sol, pulchra ut Luna,” is one of the texts of the Canticles applied to Mary ; and also in a passage of the Revelation, “A woman clothed with the sun, having the moon under her feet, and on her head a crown of twelve stars.” Hence the radiance of the sun above her head, and the crescent moon beneath her feet. From inevitable association the crescent moon suggests the idea of the perpetual chastity ; but in this sense it would be a pagan rather than a Christian attribute.

2. The STAR. This attribute, often embroidered in front of the veil of the Virgin, or on the right shoulder of her blue mantle, has become almost as a badge from which several well-known pictures derive their title, “La Madonna della Stella.” It is, in the first place, an attribute alluding to the most beautiful and expressive of her many titles : ” Stella Maris,” Star of the Sea, which is one interpretation of her Jewish name, Miriam ; but she is also ” Stella Jacobi,” the Star of Jacob ; ” Stella Matutina,” the Morning Star ; ” Stella non Erratica,” the Fixed Star. When, instead of the single star on her veil or mantle, she has the crown of twelve stars, the allusion is to the text of the Apocalypse already quoted, and the number of stars is in allusion to the number of the Apostles.’

3. The LILY. ” I am the rose of Sharon, and the lily of the valleys” (Cant. ii. 1, 2). As the general emblem of purity, the lily is introduced into the Annunciation, where it ought to be without stamens : and in the enthroned Madonnas it is frequently placed in the hands of attendant angels, more particularly in the Florentine Madonnas ; the lily, as the emblem of their patroness, being chosen by the citizens as the device of the city. For the same reason it became that of the French monarchy. Thorns are sometimes interlaced with the lily, to express the ” Lilium inter Spinas” (Cant. ii. 2).

4. The Rose. She is the rose of Sharon, as well as the lily of the valley ; and as an emblem of love and beauty, the rose is especially dedicated to her. The plantation or garden of roses is often introduced ; sometimes it forms the back-ground of the picture. There is a most beautiful example in a Madonna by Cesare di Sesto (Brera, Milan) ; and another, ” the Madonna of the Rose Bush,” by Martin Schoen. (Cathedral, Colmar.)

5. The INCLOSED GARDEN (Hortus conclusus) is an image borrowed, like many others, from the Song of Solomon (Cant. iv. 12). I have seen this inclosed garden very significantly placed in the background of the Annunciation, and in pictures of the Immaculate Conception. Sometimes the in-closure is formed of a treillage or hedge of roses, as in a beautiful Virgin by Francia. (Munich Gallery.) Sometimes it is merely formed of stakes or palisades, as in some of the prints by Albert Dürer. 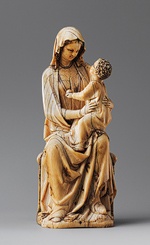 The WELL always full ; the FOUNTAIN forever sealed ; the TOWER of David ; the TEMPLE of Solomon : the CITY of David (Civitas sancta) (Cant. iv. 4, 12, 15) ; all these are attributes borrowed from the Canticles, and are introduced into pictures and stained glass.

6. The PORTA CLAUSA, the Closed Gate, is another metaphor, taken from the prophecy of Ezekiel (xliv. 2).

7. The CEDAR of Lebanon (Cedrus exaltata, ” exalted as a cedar in Lebanon “), because of its height, its incorruptible substance, its perfume, and the healing virtues attributed to it in the East, expresses the greatness, the beauty, the goodness of Mary.

The victorious PALM, the Plantain ” far spreading,” and the Cypress pointing to heaven, are also emblems of the Virgin.

The OLIVE, as a sign of peace, hope, and abundance, is also a fitting emblem of the graces of Mary.

8. The STEM of Jesse (Is. xi. 1), figured as a green branch entwined with flowers, is also very significant.

9. The MIRROR (Specula sine maculâ) is a metaphor borrowed from the Book of Wisdom (vii. 25). We meet with it in some of the late pictures of the Immaculate Conception.

10. The SEALED Book is also a symbol often placed in the hands of the Virgin in a mystical Annunciation, and sufficiently significant. The allusion is to the text, ” In that book were all my members written ; ” and also to the text in Isaiah (xxix. 11, 12), in which he describes the vision of the book that was sealed, and could be read neither by the learned nor the unlearned.

11. ” The Bush which burned and was not consumed “ is introduced, with a mystical significance, into an Annunciation by Titian. 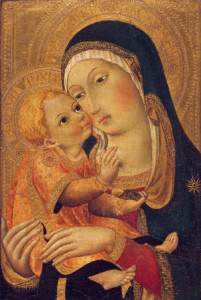 Besides these symbols, which have a mystic and sacred significance, and are applicable to the Virgin only, certain attributes and accessories are introduced into pictures of the Madonna and Child, which are capable of a more general interpretation.

1. The GLOBE, as the emblem of sovereignty, was very early placed in the hand of the divine Child. When the globe is under the feet of the Madonna and encircled by a serpent, as in some later pictures, it figures our Redemption ; her triumph over a fallen world — fallen through sin.

2. The SERPENT is the general emblem of Sin or Satan ; but under the feet of the Virgin it has a peculiar significance. She has generally her foot on the head of the reptile. ” SHE shall bruise thy head,” as it is interpreted in the Roman Catholic Church.

3. The APPLE, which of all the attributes is the most common, signifies the fall of man, which made Redemption necessary. It is sometimes placed in the hands of the Child ; but when in the hand of the Mother, she is then designated as the second Eve.

4. The POMEGRANATE, with the seeds displayed, was the ancient emblem of hope, and more particularly of religious hope. It is often placed in the hands of the Child, who sometimes presents it to his Mother.

Other fruits and flowers, always beautiful accessories, are frequently introduced, according to the taste of the artist. But fruits in a general sense signified “the fruits of the Spirit — joy, peace, love ; ” and flowers were consecrated to the Virgin : hence we yet see them placed before her as offerings.

5. EARS OF WHEAT in the hand of the Infant (as in a lovely little Madonna by Ludovico Caracci, Lansdowne Collection) figured the bread in the Eucharist, and GRAPES the wine. There was another exactly similar in the collection of Mr. Rogers.

6. The Book. In the hand of the Infant Christ, the book is the Gospel in a general sense, or it is the Book of Wisdom. In the hand of the Madonna, it may have one of two meanings. When open, or when she has her finger between the leaves, or when the Child is turning over the pages, then it is the Book. of Wisdom, and is always supposed to be open at the seventh chapter. When the book is clasped or sealed, it is a mystical symbol of the Virgin herself, as I have already explained. 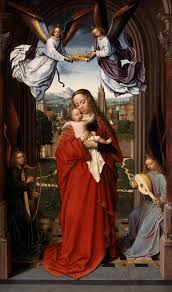 7. The DOVE, as the received emblem of the Holy Spirit, is properly placed above, as hovering over the Virgin. There is an exception to this rule in a very interesting picture in the Louvre, where the Holy Dove (with the nimbus) is placed at the feet of the Child. This is so unusual, and so contrary to all the received proprieties of religious Art, that I think the nimbus may have been added afterwards.

The seven doves round the head of the Virgin signify the seven gifts of the Spirit. These characterize her as personified Wisdom — the Mater Sapientiae.

Doves placed near Mary when she is reading, or at work in the temple, are expressive of her gentleness and tenderness.

8. BIRDS. The bird in the Egyptian hieroglyphics signified the soul of man. In the very ancient pictures there can be no doubt, I think, that the bird in the hand of Christ figured the soul, or the spiritual as opposed to the material. But, in the later pictures, the original meaning being lost, birds’ became mere ornamental accessories, or playthings. Sometimes it is a parrot from the East, sometimes a partridge (the partridge is frequently in the Venetian pictures) : some-times a goldfinch, as in Raphael’s Madonna del Cardellino. [Pitti, Florence.] In a Madonna by Guercino, the Mother holds a bird perched on her hand, and the Child, with a most naive infantine expression, shrinks back from it. It was in the collection of Mr. Rogers. [Sold in 1856. Vide Redford’s Sales, vol. ii. p. 234.] In a picture by Baroccio, he holds it up before a cat (National Gallery, London) : so completely were the original symbolism and all the religious proprieties of Art at this time set aside.

Stir up your power, O Lord,
and come to our help with mighty strength,
that what our sins impede
the grace of your mercy may hasten.
Through our Lord Jesus Christ, your Son,
who lives and reigns with you in the unity of the Holy Spirit,
one God, for ever and ever. *