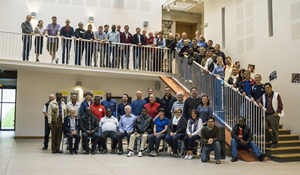 Over sixty Marists from all five continents found themselves together at The Hermitage in France in the first week of May. They included the two groups of Brothers on the ‘Senderos’ courses (from El Escorial and Manziana) and a group of 33 Marists from Australia (mainly teachers from Marist schools) who were completing the annual pilgrimage organised by the Marist Association of St Marcellin in Australia.

This coincidence allowed everyone to get to know other Marists from across the world, and also to have some prayer and shared experience. As both groups had planned to go to Lalouvesc and Le Puy on the same day, they decided that they would travel together, and to celebrate Mass together at the old High Altar in the Basilica at Le Puy.