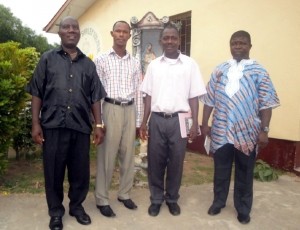 Ebola virus has not been in the news much lately, even if not long time ago, it was the most raised issue by international media. There have been conferences, debates, and awareness campaigns.

Liberia is among the occidental African countries where the virus spread the most in the last months. The Marists have been present there for the past 28 years. The Institute has a community in Monrovia. We contacted Br. Anthony Siryehto and ask him to share with us the Marist experience in the country.

How many brothers work in Liberia and what is your main work?

We are four Marist Brothers presently working in Liberia and our main work is teaching in the school. The Marist Brothers do not have their own school in Liberia. We are running a school belonging to the Archdiocese of Monrovia (Sister Shirley Kolmer Memorial Catholic School). The Late Archbishop Michael Kpala Francis, in 2005, signed a contract with the Marist Brothers to take over the administration of the School. The school has a staff strength of 41 members; 7 for administration, 31 as teachers, 4 for security and 2 as campus janitors. Currently, the school has 835 students both boys and girls.

Can you remind us what were the measures taken by the brothers when there were the spread of the virus, in order to face the emergency both as a community and as help for the people? 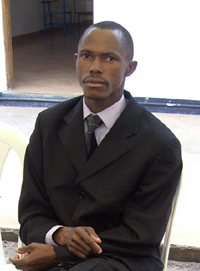 Ebola has now killed more than 5,600 people across West Africa within the last six months and approximately half the deaths have occurred in Liberia. During the heat of the virus in Liberia, the Marist Brothers tried to keep themselves at home and other days we went out to save lives of those who needed our love and care. To protect ourselves, we had a bucket for washing hands in front of our community because that is the first protocol for Ebola prevention.

On the other hand, we are committed to the common good and welfare of our Liberian people. We gave our lives to Christ so that others may live and that is what we shared with the local people. We suffered together with them and for them. During that time, we went out to provide workshops and awareness programs on Ebola prevention among various communities in Monrovia. People were dying of hunger and the Marist Brothers could not stand to just see and watch our people wasting away. We helped to provide food and other Ebola protective materials that were necessary for the time.

How is the situation now in Liberia regarding the spread of the virus and how has it changed your daily activities? 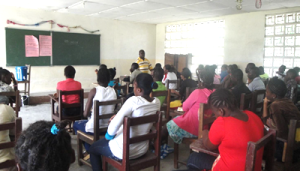 The cases of Ebola virus have dramatically reduced and everyone in Liberia is happy. Because of the Ebola virus, people left their work in offices and in the market areas. Business people could not travel for their goods and all of these brought suffering in Liberia up to date. Now that Ebola has reduced, our daily activities have changed in every way. We have resumed school and all our children are back in the classroom and ready to learn. Food materials are getting back on the market and very soon, prices of goods will reduce. People are going back to their various work places and they will soon be getting their daily salaries that were stopped by the Government. The life of the Liberian people is gradually coming to normality.

What are you doing now regarding that problem?

The problem still exists despite the fact that Ebola virus is reducing in Liberia. We are taking serious preventive measure both in the community and school. As I said, the school contains 835 students and 41 staff. Temperature of each person is taken everyday before entering the school campus. The process of taking care of all these people under a single building is a challenge to all of us. We use chlorine, thermometers, soap, detergent, sanitizers, water drums, buckets, gloves and many others. Most of these materials are bought by the schools almost every week and we don’t have government or international contribution to help us. Even though there is no money to continue with this preventive measure for the whole, we cannot watch our Liberian children stay home without education. The Government of Liberia has urged every school to resume and manage on its own as far as all Ebola preventives measures are concerned.

The Marist Brothers in collaboration with all our stakeholders are putting all strategies in place to make sure we protect and safeguard the lives of our children and their families at home. All we are requesting is the assistance of our International partners to join us in the fight of this deadly Ebola virus.

Do you receive some help from the Marist world?

The Liberian did not fight this battle alone. As I said above, we have provided food, Ebola projective materials, awareness programs and workshops to our local people. For these activities to take place, we have gotten financial contribution from the Marist world. To be specific, we are grateful to FMSI and SED who have committed themselves to saving the lives of the Liberian people. All along, since September 2014, FMSI, SED and our District House in Accra have been sending us financial assistance to help the local people. Even as I write, SED stills support us with Psycho-Social Support program and food distribution that will end in May 2015. May God continue to bless Angela and Sara from the General House (FMSI), Ana and Fernando of Spain (SED), who have been our link between Liberia and the International community.

As we appreciate the kind gesture of the Marist Brothers all over the world, I would not want to leave our international partners out the scene. Other Religious Congregations and NGOs have contributed immensely in the fight of the battle. We remain thankful to PorAfrica of Spain, Adorer Sisters of the Blood of Jesus in the USA and Sisters of the Franciscan Missionary in Monrovia.

How many people have you provided help to during the Ebola crisis? 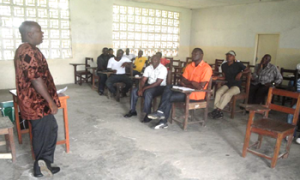 The Marist Brothers have provided help to more than 2,000 Liberians during the Ebola outbreak through our projects like food distribution, workshops, awareness programs and distribution of Ebola protective materials. Some of these people are direct beneficiaries and others are indirect beneficiaries. We have visited so many homes in the nearby communities to talk to families who are Ebola victims, other children who are Ebola orphans are sent to school on the Marist Brothers’ Charity fund and so many of our work has impact on the lives of the people here.

What is the message you want to spread to the Marist community regarding that topic?

Indeed, we are grateful to all of our Marist communities form all the world. Some provided spiritual support and others have provided financial support to keep the Marist mission in Liberia. We wouldn’t have survived the virus without your immense contribution. Though the spread of the virus continues to reduce, our life is still in danger because Liberia has not been declared EBOLA VIRUS FREE.

As we continue to carry out our mission on this land of tears and mourning for our diseased brothers and sisters, we urgently need your financial assistance to arrive at the end of the road. The virus has brought so many setbacks in Liberia and only International donors can help. There are so many needs created in Liberia that we must attend to.

The Marist Brothers and the entire people of Liberia need your financial assistance in whatever way. The little you think is nothing, will save the life of one Liberian.

Many thanks to each of you and GOD BLESS MARIST.