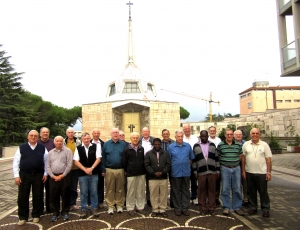 A two-month course for elderly Brothers who speak English has begun at the general house, bringing together Marist and Marianist brothers.

The programme, which began on Oct. 12 and will end on Dec. 12, is focusing on the psychological and spiritual “dynamics” in their changing age and its participants include 16 Marist brothers, two Marianist brothers and a Marianist priest, their chaplain.

“Entering the third age is important because it is a time of transition,” said Brother Michael Sexton, an Australian Marist who lives in Algeria and is leading the course.

“It is often the moment when people finish an active professional career and are moving into a time where they may be experiencing things like physical limitations,” he told the general house press office on Oct. 8.

Br Michael, who is based in Oran, Algeria, underscored that “it can also be a time for them to change directions completely in terms of ministry possibilities.”

He is leading the course alongside Brother Donnell Neary, who works in a Marist high school in Chicago.

“The Marist vocation is life-long but the nature of the call changes at each stage of our lives,” stressed Br Donnell. “It is important that the Brothers take time to listen to what God is calling them to at this moment in their lives.”

The Brothers will go on a pilgrimage to historic places in France related to the founding of the Marist Institute, including Fourvière, La Valla, Rosey, Hermitage and will meet other members of the Marist Family – Fathers, Sisters and Missionary Sisters from Nov. 2 – 13.

The programme will conclude with a three-day retreat at the general house, led by Father David Glenday MCCJ.

The Marists participating are from the United States, Australia, New Zealand, Kiribati, Argentina, the Philippines, Nigeria, Zimbabwe and Spain.

The Marianists are from the United States, India and France.

Guide Pope Francis and all our bishops according to your gracious will.