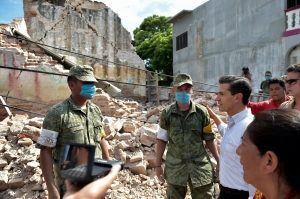 Marists in Mexico are appealing for help after the strongest earthquake the country has seen in a century left 90 people dead on Sept. 7.

“In these circumstances, all kind of help is good,” affirmed Brother Javier Francisco Salcedo Camarena.

“We are planning a meeting with Brother Daniel Herrera (who travelled to Asunción Ixtaltepec, among the worst towns affected), to begin designing a solidarity campaign at provincial and international level with the information he brings to us and what he talks about, since the situation demands it,” he continued in a letter to the country’s Marists on Sept. 10.

The 8.1 magnitude earthquake, which struck off the southern coast, has also destroyed several homes and buildings in the Marist province of México Central.

The Marists of the province have survived the tremor.

There is no news yet of possible damages to the San José and San Felipe schools in the region of Istmo de Tehuantepec, or of the schools at the coast of the Oaxaca state.

Hundreds of families have reportedly been camping in the streets, afraid of the dangers of aftershocks.

The country’s east coast was then hit by hurricane Katia on Sept. 8, leaving two people dead in mudslides after heavy rain fall.

In Ixtaltepec, Oaxaca, the house of the community was destroyed; the school and boarding school suffered structural damage.