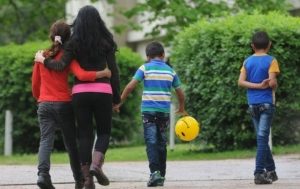 In October of 2014, the first refugee Syrian families arrived to the Marist house Saint Joseph in Montevideo from Lebanon. The initiative of the President of the Eastern Republic of Uruguay was made concrete with the arrival of five families, all with reference adults and mostly children and young people; 42 people in total.

The aim was to create a space of intimacy, safety and comfort, and several teams of professionals – including Marist educators and people of other organisations – implemented projects so that the newcomers could help learn the language and the Uruguayan culture and start walking towards greater autonomy in order to integrate themselves the best way possible in society.

The first group was housed for about three months in the San José house, until a first evaluation of the process. From the start, the Uruguayan government provided for the integration of all migrants into the local education system, at the corresponding levels, and provided for permanent accommodation for each family, as well as work solutions for adults.

The Marists were in charge of developing two projects in the social and educational area. During the first months, before going to their definite families, the following projects were implemented:

Cultural insertion for adapting to Uruguayan environment, for getting to know the areas, the customs, the way of living, the country’s characteristics and the aspects of daily life that they must know to make their own decisions.

Recreational accompaniment to allow the deployment of skills and the acquisition of tools in a climate of respect and reciprocity.

The specific objectives of this proposal included:

fostering a climate of encounter, respect, work and reciprocity between migrants and recreators; promoting the development of the expressive dimension of migrants, through the exercise of different tools and resources; encouraging exploration and encounter with Uruguay’s natural and cultural environment, promoting reciprocity, exchange, respect and care for the environment; fabouring the discovery of the body as an instrument of enjoyment and deployment of skills; promoting teamwork, cooperation and forms of collective action, as a privileged means for the resolution of situations; accompanying the acquisition of playful tools that favour the social insertion of the migrants in the Uruguayan culture.