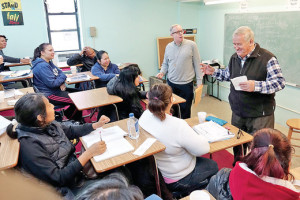 The good thing about being a Marist Brother, explained Brother John Klein, F.M.S., is wherever a Marist goes around the world, with some 4,000 brothers active in 82 countries, there will be a community to welcome and accept him.

Community. It’s what the Marists are all about. And right now in East Harlem three Marist Brothers—Brother Klein, from the United States, Brother Santos Garcia, F.M.S. from Spain via Ecuador where he has served for 40 years, and Brother Hector Dessavre, F.M.S., from Mexico—are building a new community where none had previously existed among recent immigrants from Mexico, Central and South America that have settled in that neighborhood, many of them undocumented and living in the shadows.

“It’s completely unique in the sense that, one, it’s responding to the critical needs of people in need, people on the margins,” Brother Klein explained of Communidad Juan Diego, based at Our Lady Queen of Angels School on East 112th Street. “The second way it’s unique is that we are an international community of Marist brothers. So it’s very different even among the brothers. When we came together we didn’t know each other. So it’s learning to live Marist life in a very intentional way, a strong prayer life, strong faith and strong spirituality, learning and really appreciating a variety of cultures and learning to work in a common cause.”

Initially established by the Archdiocese of New York in 2013, the Marist Brothers took over operation of the Juan Diego community in September. The main organizing principle is teaching English as a second language (ESL), but the community is much more than that. 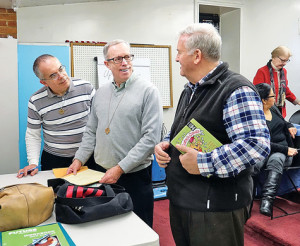 Brother Hector Dessavre, F.M.S., left, is the third member of the Marist community at Queen of Angels. Though their programs they are seeking to build a community of friendship, faith and mutual support in East Harlem.

“The needs are really very, very significant and the big hope is this is not just about providing services. It’s about forming a community of friendship, support and faith,” Brother Klein said. “It’s learning English but it’s also developing community and very strong friendships between and among the people. And I think that’s really happened. The people are wonderful. They appreciate every single thing you do and there is a great spirit.”

There are about 80 families involved in the programs the Juan Diego Community offers. Aside from English classes, there are craft classes, a discussion group and tutoring programs for students. A growing youth group meets on Friday evenings. Feast days from home are celebrated. Aside from the three Marist Brothers, there are 13 volunteers, many of them retired educators, tutoring, teaching ESL and leading other support groups. Brother Klein said parishioners at nearby St. Ignatius Loyola parish on Park Avenue have been greatly involved as tutors. The tutors work with the children of the community to bring their studies up to grade level or better.

But it is the social interaction, the spirituality, which sets the Juan Diego community apart from other ESL programs. During discussion sessions, called “sharing groups,” members of the community are encouraged to talk about issues that are important to them: family, the challenges of adjusting to life in a different, at times hostile, culture. It is a kind of peer support group and is very popular.

“It’s more than news or what you did today,” Brother Garcia explained. “It goes much deeper. It’s life. It’s faith.” Many members of the community come virtually every day to take part in one program or another. They all agree learning English is very important, of course.

“When I go to the hospital I want to understand what the doctor says,” explained Lorenza Sanchez, a mother of four from Mexico. “I have to (be able) to talk to my children’s teachers to know how they are doing in school. In the house they speak English and I want to know what they are talking about. I enjoy Brother John’s English classes because they don’t sound like an English class, they sound like a homily.”

But then they mention the social aspect. Coming to the school on East 112th Street is a way to escape the isolation and loneliness recent immigrants can feel, especially women often trapped at home without adult companionship.

Ms. Sanchez and Anna Rodriguez, a mother of two from Peru, have become fast friends. Ms. Rodriguez commutes from Queens.

“I spend time with Lorenza, shopping or going to her home, just enjoying life,” Ms. Rodriguez said with a smile. She said the program had literally given her “freedom.”

Ignacia Gonzalez, a mother of three from Mexico, added, “First is learning English. Second is making friends in the community.”

The Marists are looking at ways to bring more young adults, including men, into the fold. Brother Hector is working with one young fellow, an indigenous man from Mexico, to teach him to read and write in Spanish.

“He’s a hard worker, and he’s determined,” Brother Klein said. “He’s working in a Chinese restaurant receiving $35 a day for 12 hours work. He’s an intelligent guy and a really nice man. He heard we were here and he just showed up.” It is about trust offered Brother Santos.

The project, with an operating budget this year of $204,000, is funded by Fidelis Health Care, The Alfred E. Smith Memorial Foundation, The Marist Third World Fund, the Marist Brothers and through archdiocesan fund-raising efforts. But that funding runs out in August.

“Currently Brother Santos and I are working on a grant proposal,” Brother Klein said. “Going forward for the project to continue we’re hoping there will be donors, foundations, people that will help us. But if we can’t raise the money the program can’t continue. If we’re not here, there’s nothing.”

Without Comunidad Juan Diego, East Harlem might not look that different, at least not on the surface, not to an outsider. But then there is that youth group Brother Hector and Brother John started working with on Friday evenings.

“We started with 22. We’re about 35 now,” Brother Klein said. “It’s a pretty big youth group. So we have these teenagers and we have discussions. We have prayer. We’ve had them here for an open gym night. They’re in tough situations. And one night we had a conversation about what are the challenges of living in East Harlem and they just talked. It was quite revealing. The violence, gangs, drugs, trying to do their homework, family life, all the predictable things. But it was interesting when we ended the night the youth leader said, ‘Let’s finish with the Rosary.’ So here we are. It’s 8 o’clock on Friday night in the basement of St. Cecilia’s Church with the kids, kneeling, at least 25 teenagers, saying the Rosary.

“I thought, ‘If we weren’t here this wouldn’t have happened.’”