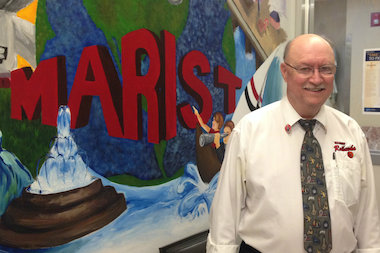 MOUNT GREENWOOD — Brother Richard Grenier doesn’t have to travel far for his job.

The 70-year-old resides on the Marist High Schoolcampus, where he’s spent most of his adult life.

Grenier has been at Marist for 45 years, so long that he was inducted into the school’s Hall of Fame for Lifetime Achievement in 2001. He would like to work five more years to make it an even 50.

“As long as my legs hold out, my brain holds out and my ticker holds out,” said Grenier, who lives with four retired Marist Brothers in a residence attached to the school. “The time has gone by real fast. There’s never been a dull moment.”

Marist High School was founded in 1963, and Grenier arrived in 1969. He’s become perhaps the most important employee in the school’s history and served multiple roles, including teacher, coach, athletic director, dean of discipline and department chairman.

Since leaving full-time teaching in 2002 — he wore a tuxedo on his last day — Grenier’s official title has been “administrative assistant,” which means he performs a variety of roles like substitute teacher, after-school traffic director and Marist’s No. 1 sports fan. He travels on the RedHawks‘ athletic team buses at least four times a week, and wears Marist bright-red socks daily.

“He was our beloved consistent companion, personal cheerleader and escort,” said Natalie Holder, of Beverly, a former girls volleyball head coach and current English teacher at the school. “The more things change at Marist, the more he seems to stay the same.”

Said football head coach and Marist alumnus Pat Dunne: “Why has Brother Rich been such a consistent figure at the school? Words will not do it justice.”

Grenier has learned a great deal in his 70 years, but he can boil his secrets to success down to one quote and three pillars of excellence.

The quotation is from a line of Nat King Cole’s song “Nature Boy” that says, “The greatest thing you’ll ever learn is just to love and be loved in return.”

“That to me is I think how I’d like to see everybody live because it’s the essence of the New Testament,” Grenier said.

His pillars are: 1. Having integrity; 2. Exhibiting passion; and 3. Being familiar with the legacy and tradition of the organization to which you belong.

“Put all those things together, and you’re going to have a tremendous amount of success,” Grenier said. “This is something I’ve seen from seeing people succeed through the decades. And I’ve seen what happens when you don’t have them. Good chances are, you’re going to fail miserably.”

Grenier’s philosophy goes hand in hand with the views of the Marist Brothers, which were founded in 1817 in France to create a group of men who would teach the Christian religion, education and morality to youth.

Grenier was born and raised in Biddeford, Maine, and in his thick New England accent, he described how he became a Marist Brother. During his senior year at Merrimack College in North Andover, Mass., Grenier believed he had a calling to serve Christ and become a role model for children.

A friend of his had an uncle who was a Marist Brother, and, after an hourlong conversation with him, Grenier decided a life poverty, chastity and obedience was for him.

“I’ve never regretted it,” Grenier said. “It’s not for everybody, but for me, this is what I thought I was being called to do.”

Grenier transferred to Marist in 1969 after three years at Lourdes High School in Poughkeepsie, N.Y.

He has seen a great deal of change in his time at the Far Southwest Side Catholic school, including changing its mascot from the Redskins to the less controversial RedHawks in 1997.

In 2002, Marist went coed, with a class of freshmen girls joining the four grades of boys.

“We should have done it years before we did,” Grenier said. “I’ve seen for many years how girls are treated as second-class citizens and not given the same amount of adulation. When they came in, I wanted to make them feel as at home as possible, as comfortable as possible.”

That extended to his backing of the girls athletic squads. Girls basketball head coach Mary Pat Connolly said Grenier was always the first person she saw after a game, and he always wanted to discuss ways to improve.

“He loves the girls sports as much as the boys,” said Connolly, of Mount Greenwood. “He cares about all the players.”

During the RedHawks’ softball team’s march to a state title in 2012, head coach Denise Bromberek said Grenier’s focus on his three pillars during pregame speeches to the team provided huge motivation. When the RedHawks won the IHSA 4A state crown — the first girls championship in the school’s history — Bromberek presented Grenier with his own red-jeweled ring.

“Brother Rich will always be an inspiration to Marist softball, and with his inspiration, I wanted to make sure Brother Rich understood how important he is,” Bromberek said.

The only guarantee is he’ll be wearing the red socks, which Grenier said are hard to find and which he’ll buy 25 to 30 pairs at a time when he can find them online or in stores.

“You can buy almost anything on the Internet, but it’s almost impossible to get red socks,” he said.

Laughter is a key

Grenier’s daily goal is to get at least three students to laugh.

“And the kids, when they see me coming, they laugh like hell,” Grenier said.

He looks back on 45 years — when Grenier came to Marist, Richard Nixon was president — and can’t fathom how quickly the years have flown by.

When he hits the five-decade mark, Grenier will retire, but not in the traditional sense. He said he’ll continue to stay active in the community, working at least three hours a day, going places and doing things.

“Watching TV six hours a day, that’s not my idea of retirement,” he said.

Asked how he feels about his life at the same school, Grenier stated succinctly that he was “blessed.”

“I consider myself very, very fortunate,” Grenier said. “I’m very blessed to have all these years at Marist.”