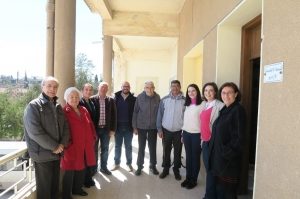 On December 23rd 2016, the nightmare ended for the inhabitants of Aleppo. On that day, the last convoy of rebels and terrorists, who had occupied the eastern and southern neighborhoods of Aleppo since July 2012, left the city to go under neutral supervision to a neighboring province, Idlib, which is still under the control of Al Nosra’s terrorists.

The Alepins were delighted about the liberation of their city. There was no longer East or West; Aleppo was once again, as it has always been, one city under the control of the Syrian Government. Only 15,000 inhabitants of the eastern neighborhoods were evacuated, at their request, with the rebels towards Idlib. The rest, more than 100,000 who were enduring the occupation without a choice, only because their homes were there, remained in Aleppo. They suffered a lot, but are relieved, after 4 years of terrorist occupation and 3 months of siege of their neighborhood, by the Syrian army. For the 1.5 million inhabitants of the western neighborhoods, which were under the government control, the liberation provided a sense of security that they had lost for more than four years: the security of no longer receiving mortars, propane tanks used as bombs and snipers gun shots. But, cautious optimism: bombs continue to fall occasionally on the peripheral western neighborhoods of Aleppo launched by the rebels still settled a few kilometers away in the western suburbs.