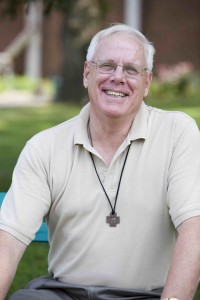 He is: Marist Brother Hank Hammer, president of Marist High School in Chicago. Has also ministered as a teacher, province vocation director, director of evangelization, assistant provincial, and as academic dean and principal at Marist.

First, what is a brother? “The difference between a congregation like the Marist Brothers of the Schools and priesthood is, we’re not ordained; we’re not considered part of the clerical state, and we take the three vows. We draw strength from community to go into ministry. Priests’ focus is on sacramental ministry.”

Youth: “I grew up on Long Island, in a very Catholic, suburban area. Went to Catholic grammar school. The Marist area here in Chicago reminds me of where I grew up. The parish was the center of the neighborhood. This was in the late-50s to mid-60s — the whole idea of religious vocation was actively promoted. I grew up pre-Vatican and post-Vatican. The parish I lived in was very involved in ‘youth ministry,’ and our priests were very welcoming to high school kids. Most of us went to public school because the Catholic high schools were regional.

“I have a twin sister. We went to grammar and high school together. My brother is 7 years younger. Dad worked for Pfizer Pharmaceuticals as director of quality control. Mom had been a teacher before we kids came along. My dad had taught, too. My sister is a teacher as well. I trained as an English teacher and was lucky enough to be an English teacher. I loved it. 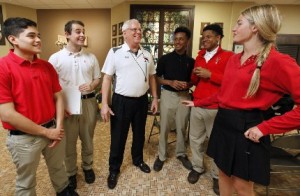 The call: “I went to Marist College in Poughkeepsie. In late grammar school and high school I had a sense I wanted to be a brother. I knew I didn’t want to be a priest. The priests in my parish were wonderful, but I wanted to be a teacher. I think that probably helped determine my path. I knew there were many orders of brothers who did that.

“As a lay student in Marist College there were a number of brothers on the faculty and a number of ‘student brothers’ in formation. That was the first time I’d met brothers. We had a family friend who was a brother, but I’d never seen them in action until college. The faculty brothers were dynamic and extremely present to all the students and concerned about us. The college had just gone co-ed at the time. There were brothers in charge of the dorms and things like that.

“I also got to know some of the student brothers in formation. It kind of fed into my earlier thinking in high school about being a brother. When I graduated from college I entered as a ‘candidate,’ as we were called in those days. I came to Marist High School here in 1973. There were four of us and we lived with the brothers for two years and worked in the school. We left here to go to novitiate and I was lucky enough to come back for about 5 years. Then I was transferred to our school in the Bronx in New York. That was the only other Marist school I’ve taught in. I had started teaching at age 21. But I grew into teaching when I spent my years in the Bronx. I was a little bit older, it was a different school — I learned what it meant to be a teacher. The kids were absolutely delightful, even though parts of the neighborhood were rough. It was a different type of kid because of the environment, but absolutely wonderful. I don’t think I’d trade those 5 years for anything.

“Then I came back here to Marist, served as administrator, an academic dean and eventually principal. Next I was asked to go into province ministry. I served for a couple years in the late 90s as vocation director and around 1999 I was asked to start something new for our province. We’ve called it ‘Marist Evangelization.’ We went out as a team of brothers and lay people into all our schools. We talked about who we are as Marist schools and the impact of our founder on education. We were trying to form people who understand what makes us Marist Schools and about the vision, mission and practice of our founder, St. Marcellin Champagnat.” That was his ministry for 13 years.

Range of ministries: “There are quite a few brothers involved in schools. We have others, for example, in East Harlem where they work in a largely Hispanic area offering after school tutoring in English classes for parents. Other brothers work in high school and college campus ministry. There’s faith formation with young adults in parishes. Our office of evangelization has a young adult program for students who have gone through our high schools and want to remain Marist. We also have a college program and a post-college program of retreats and prayer resources, and spiritual direction — different ways to reach young people.”

Community life: “Our communities are smaller today. When I first entered I lived in a community of 36. Community life is very important for us because it’s part of our identity. We draw our strength from each other and from that communal experience; that sense of ‘we’re in this together.’ My community is down to three – next year we may be four. We have evening prayer together every night and regular community meetings. We’ve been faithful to it because we realize we need it. We’re always getting material on religious life from our province and our general council in Rome. We talk about what it means to be a Marist Brother today; a brother in partnership with Marist laity.”

Marking this year: “I think a lot of brothers are taking an interest in the pope’s affirmation this year of consecrated life. We’re having a number of events in our province and the region. There’s great enthusiasm because the pope himself is a religious. I know many congregations of brothers, sisters and priests are thrilled with his identification with consecrated life, because he can articulate it, much like Cardinal George did. He had a great appreciation and understanding of consecrated life because that was who he was. We’ve been very lucky here in Chicago to have someone like Cardinal George and now Pope Francis.”

Leisure: “There are sometimes weekend responsibilities for me at the school here. It’s good to spend time with the brothers you live with and not have your activity related to school. I’m involved in my parish, St. Barnabas. I’m in the choir, a cantor, and on the liturgy committee, so I have a good group of friends equally involved in the parish. That’s been a very life-giving thing, too. It’s an incredible parish with a wonderful pastor, and has really enriched my spiritual life. It compliments what we’re doing in community.”

“I vacation with my family, or with brothers I’ve ‘grown up with’ as friends. We used to have a house right near the beach out on Long Island. A few of us would stay there a week just to go somewhere completely different. A place to unwind and talk with these guys about life in the brothers today. Things have changed a lot since we entered; it’s important to talk about ‘where are you at now?’ ‘What are you thinking for the future’? Some of them I’ve worked with before, and we stay together by phone during the year.

“I’m a very amateur gardener and I also enjoy music I know guitar and play piano, which I find very relaxing. Because the life I lead in school is very busy, I sometimes like quiet and solitude for spiritual development. I’m reading Pope Francis’s book ‘The Church of Mercy.’ It’s written in an enjoyable every-person language. Henri Nouwen is a great favorite of mine. I also like to read historical fiction, particularly Irish fiction, to leave the ministry world aside for a bit.”

Life of a Marist Brother? “It has been a wonderful life. I’ve been a brother for 40 years. It doesn’t feel like 40 years. I’ve been energized by everything I’ve done. Everything I did as a brother prepared me for the next thing, even though I didn’t know what the next thing was going to be. I’ve loved every minute of it. My previous work In Marist Evangelization was exciting because it was an effort to share our charism and our educational pedagogy with people in our schools. I traveled in that role – we’re in 79 countries – to Brazil, Japan, Australia, Central and South America, and Canada to see what is going on in Marist ministry there. My concept of the Marist world is quite large. We have a congregational emphasis right now on internationality.

“Many see a diminishment in vocations, and there has been in many congregations, ours included, there is also this new delight in the charism by many of our lay colleagues.  We have a whole new interest in the mission of St. Marcellin Champagnat and an understanding of it that we didn’t have before. So what people look at as diminishment I really think is the Spirit leading us into the future. And it’s happening all over the Marist world.”

– Newspaper for the Archdiocese of Chicago